What is Microsoft Word?

Microsoft Word, part of the

Microsoft Office Suite but also sold as a standalone application, is Microsoft's word processor. Its proprietary (but open-specification) DOC format is considered a de-facto standard, although from 2007 and above, Word uses DOCX.

Other features include SmartArt, PDF support, and feature searching (as of Word 2016).

Office Online, is the web client with a limited feature set.

Using the mobile app, an

Microsoft 365 subscription is required to create and edit documents with a screen size of 10.1 inches or larger; documents will be opened in read-only mode. 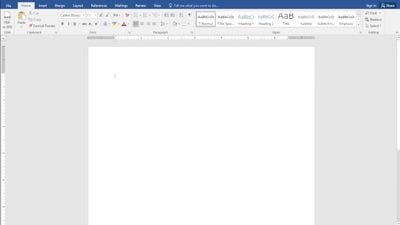 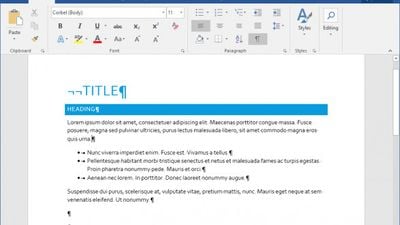 Our users have written 27 comments and reviews about Microsoft Word, and it has gotten 863 likes

Hate the 365 spammy thing, but styles and linking with Excel are fundamentals

Use the main Office client instead and feel no pain

I think Microsoft Word has all that features a word processing software requires. In recent years it has innumerable changes for better results and productivity.

Microsoft is one of the world's richest and best-established software companies. It's incredible to think then that their market-dominating word processor has quite so many awful and ridiculous faults.

MS Word dominates this space not because it's "the best" in any sense; it's simply the most widely used. Long-term users of MS Word will have noticed quite a few of its problems. There are many more than this list mentions.

Below the list of my favourite MS Word faults, I offer a list of alternatives to consider.

It's beyond me how Microsoft are unable to create an office suite (MS Word being a part of that) with any decent stability on THEIR OWN operating system. The number of times I've had the "Word isn't responding and needs to stop..." error drives me to levels of anger few other things can inspire. I've had that for simple and complex documents, for years and for many different Word and Windows versions, and at the least inopportune moments. (Try it when a deadline is looming.) It's still true in 2016 on Windows 10 and Office 365 . More than this, if it happens to many people, the world over, including at Universities and multi-billion dollar companies... just think of the economic damage this preventable instability is causing. The cumulative cost must be enormous. My guess is that MS don't care sufficiently to fix this because they are the market "standard" and know their product will sell anyway. Whilst alternatives like Libre Office leave much to be desired, I've yet to have Libre Office crash, even on Windows. That suggests the economic damage of using Word IS preventable. I wish there would be legal consequences for MS for this.

Write something in MS Word and automatically Office 365 and Windows will conspire to try to upload it to Microsoft servers using the MS Upload Center. Worse still, it's not possible to switch this off easily - only to "pause" it. Switching it off completely takes a bit of work the average user won't have time or inclination to pursue - which is how MS designed this on purpose (of course!). Because they WANT your files. (Btw, this is done without client-side encryption, so MS can instantly analyze the content of my document.) That is ridiculous, unjustified and unacceptable.

It shouldn't take hard work for me to retain my privacy, and it shouldn't be Microsoft's business by default what I write. The number of cases where that could jeopardize people's personal information in unacceptable ways is enormous: what if MS servers are breached? What if the information is politically sensitive? What if it has health, or human-rights implications?

Microsoft's disregard of all this, and the concerns of its customers rights and concerns is completely consistent with its inclusion of all the other privacy-violating "features" of MS Windows, many of which require workarounds to prevent (I recommend doing this), but which are (now) part of Windows 7,8 and 10.

For years Mac versions of Word (and Office generally) have been clunky, lacking features, unstable and unweildy. The interface has been similar but not the same, meaning that you might have to look for the same feature in a different place on Mac as opposed to on Windows. Given that Microsoft's Windows is a competitor of MacOS, it's hard to believe that's coincidental. If it's not, that means Mac users have been treated on purpose as 2nd class citizens for the misdemeanour of not committing to the MS ecosystem.

Worse still, Microsoft's claimed support for open source doesn't really square with the fact that MS Office (Word included) isn't available for Linux (let alone BSD). It used to be true that, on Linux, MS Word could be run under Wine. It's no longer true for Office 365 (Word included). Is it a stretch to suppose the calculation is deliberate? Mac users are usually inclined to pay more, so let's have a Word version for them, albeit a worse one than on Windows. Linux users are into free (as in beers and as in birds) software, so they won't pay, so let's not bother. Linux/BSD users are therefore treated like 3rd class citizens.

If you pay for Office 365, you can access it online. There, you can use Word - or at least a pared down version of it - whichever operating system you use. However, this means: 1) all your documents will be on MS servers by default (so the same privacy disadvantages as above), 2) you need a Microsoft account and 3) the functionality isn't as good. MS even made their Office suite - Word included - available for free on Android. Perhaps that was their way of fighting the rise of Google Docs. The battle continues, it seems: some users have experienced problems with it on Chrome books (surprise!)

If you haven't yet been sucked into the Microsoft ecosystem and have the chance not to (e.g. because your work doesn't require it), here are some alternatives worth considering:

Believe it or not but this is a decent alternative to notepad.

I write stories in my spare time, and yes, while MS Word is very capable and fully featured I cannot justify buying it anymore. For one, MS seems to go out of their way to prevent one from only buying Word. Whether it be disincentives in the form of an inferior out-of-date version, or straight up not allowing one to purchase the software standalone.

Microsoft 365 is completely useless to me, I just want Word, and to get Word requires I spend $200 on their 1-time purchase bundle. You'd think such a hefty pricetag would practically guarantee an excellent product. It does not. Hell, they literally put ads for Office 365 into all their programs. How greedy can you get?

There are several free, and arguably better, alternatives to Word bereft of Microsoft's trademarked spyware and privacy breaching 'features'. My second device is an old laptop running Linux with LibreOffice. It does everything Word can and doesn't even have to keylog my every letter to function.

While researching how to switch from Word to free alternatives, I learned that MS makes this process unnecessarily difficult using proprietary file-types that other programs struggle to use.

Word has many useful functions that make my life easier!