Ksnip is a Qt based cross-platform screenshot tool that provides many annotation features for your screenshots.

Feature-rich and multiplatform. Only waiting for better Plasma Wayland support.

What are you missing on the Plasma Wayland Support? The screenshots capabilities come from Plasma itself. I'm currently working on the Generic Wayland Screenshot Support that is provided via XDekstopPortal, this might provide more options for taking screenshots.

I've switched from Flameshot to ksnip. This is kind of like a KDE version of the now defunct Shutter screenshot tool. The Flameshot interface sometimes had the annoyance of covering up what I needed to see with its widgets.

I would really like to see the ability to screenshot a scrolled area, like a website, like some of the Windows screenshot programs can do. But it does what it aims to very well.

There is already a feature request for taking screenshots of scrolling area https://github.com/ksnip/ksnip/issues/398

The more users request this feature the earlier it get's implemented :)

Its the linux version of Greenshot. Very much the same layout and functions with a little bit extra. My new must have print screen app for my linux systems.

Strength:
• Open source. If you are not familiar with "open source", it means this software has both stronger security & stronger privacy. Because its code is publicly available for review and contributions on GitHub at https://github.com/ksnip/ksnip
• Annotations. Mostly arrows, numbers, blur
• Both the capture delay combined with the full "Current Screen" feature are very handy to include menu
• Color picker to choose any color to your liking for annotations
• Easy to use. Reminds me of the defunct Shutter.
• Debian Backport available. To use latest features.
• Support the increasingly popular Gnome Wayland display server protocol
• Cross-platform. So much easier learning curve if you use multiple operating systems. Such as Linux, macOS, Windows. The interface is the same across those.
• Basic image editing within Ksnip. Such as cropping screenshot.
• Powered by the open source & crossplatform QT. Which include an optional dark theme & lots of user interface customization.
• Multilingual. Contributors are always at https://hosted.weblate.org/projects/ksnip/translations/
• Attractive GNU General Public License version 2. This means the software code of this extension is owned and supported by a friendly not-for-profit community. Instead of a for-profit corporation. https://github.com/ksnip/ksnip/blob/master/LICENSE.txt


Challenge:
• Not yet able to take screenshots of scrolling area. Such as a browser window. Any volunteers for a patch at https://github.com/ksnip/ksnip/issues/398

Show Your Support:
• If you enjoy this application, show your support to the authors & contributors with:
___• Donation at http://paypal.me/damirporobic
___• Github sponsor at https://github.com/sponsors/DamirPorobic

Screenshot utils are one category Windows has Linux beat by a wide margin. There is nothing I've been able to find (I've tried flameshot, ksnip, vokoscreen, spectacle, and fireshot) that comes anywhere close to the features of greenshot and XShare. That being said, KSnip is my go-to screenshot app in Linux.

This was a complaint I made previously but I have since figured out it was my own lack of knowledge of the app, and not a problem with the app itself. I edited this part of my review rather than delete it, because perhaps other users might have the same misunderstanding.

My biggest complaint was its editor's cropping tool which, for full screen captures, took me a while to figure out. Cropping itself works fine and works similar to most other apps' cropping features. It has eight cropping points that can be dragged to mark the area to crop (just like most crop tools) - top-left, top-middle, top-right, middle-left, middle-right, bottom-left, bottom-middle and bottom-right). But a full-screen capture does not fit in the editor's window, and therefore you don't see five of the eight points (!), they're scrolled off the edges of the editor's window. You must scroll the editor right and down in order to see those drag points.

To further confuse me, often times when I look at the edit window and see a scroll bar I think it is part of the captured image and not an active scroll bar from the editor. So for a long time I didn't even try to scroll right and down, and therefore I had the hardest time figuring out how to crop!

I suppose there are things ksnip could do to make cropping a fullscreen screenshots a little easier (maybe display its own scroll bars in a different color, or maybe default to zoom out when cropping an image that doesn't fit in the editing window), but I am not holding it against ksnip. In fact I've upgraded my rating to 4 stars (from 3). It isn't 5 stars only because it doesn't have all the features of greenshot and xshare. But that's hardly a complaint given that I can't find any Linux-based screencap app that has all those features! The biggest feature lacking from my perspective is a zoom-out capability (for viewing, not for scaling the image itself)

On occasion it has crashed, but I take lots of screenshots every day, edit them and copy them to my clipboard, and I usually don't bother to remove previous screenshots from ksnip's tab-based window/editor. Perhaps I need to keep fewer screenshots open at one time. It hasn't been a huge problem. Maybe once a week at the most.

Thanks for the feedback. The latest version of ksnip, 1.8.0 already supports zooming in out on the editor and we are now planning to add support for the crop and canvas modify window.

Regarding the crashes, it would be nice if you could provide more details on that, as far as I'm aware we have no open crash bug issues so this one might be a unknown to us. It would help fixing it if you log a new issue on GitHub with some details when it occurs again.

Reply written about 1 year ago

Awesome app! It knows everything I need!

This is the best screenshot tool I've found for Linux. It strikes the perfect balance between having all the annotation tools you need, without doing too much.

The interface is intuitive and there are some nice configuration options, including the ability to send screenshots to your Imgur account. 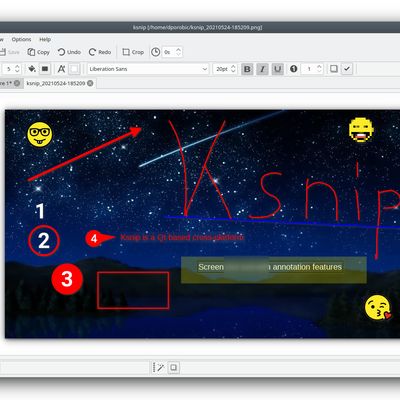 Our users have written 7 comments and reviews about Ksnip, and it has gotten 30 likes