What is Screenshot Captor?

Screenshot Captor is a program for taking screenshots on your computer. Its different from other screenshot utilis in several notable ways:

Screenshot Captor is a Heavywieght Contender in its category. With countless features to choose from, its hard to find anything missing. However, so many features comes with a cost. That cost is: it can be a little confusing to setup. An overwhelming amount of options are to be found in the ‘Preferences’ Menu, and all of its sub-menus. It even has a built in mailer system, so you can grab and send screenshots, directly from within it’s interface.

For someone with very little knowledge of computing, this software could be described as “daunting”. However, this doesn’t mean that it isn’t easy to use…once you get the hang of it that is!

Plugins like zUploader mean that within a few clicks, you can grab a screenshot, and upload it to imageshack.us and receive all the links you would want, that will allow you to share the photo directly, link it on a website using < img src="" > or using BBCode such as [img]

In addition to all this, Screenshot Captor comes with a multitude of ways to actually grab a screenshot, and allows you to setup custom keys to do so.

By default it sets some hotkeys to take screenshots for you, these take screenshots from your current screen, a slected region of your monitor, the entire workspace, specific regions, and fixed regions. Many more can be added from within the options menu.

For those who want an option of File Format, SSC will allow you to select, from yet another menu, one of 5 different file types. These are JPG, PNG, GIF, TIF and BMP. Now, obviously, if your a graphics designer, you may want a lot more options than that, but chances are, you will know how to convert the image to a different type anyway, so that is not really a massive deal. General users will almost always use either PNG or JPG.

As a further expansion into its File Types menu, you can also set the compression level, and even its Default Depth and DPI. You can also set background transparancy if you really wanted to!

As with most software created by mouser at DonationCoder, SSC will also allow you to setup how it uses memory while inactive. This is really helpful for those on lower spec machines, who want to keep it running, but don’t want it to hog those vital system resources.

File Naming can be quite interesting from within SSC as you have to use Command Style tags to choose how you want to name each file. Everything is well documented however, so is quite easy to setup if you are willing to learn. Its default naming structure would be fine for most people.

SSC also allows for special effects to be added to each screenshot, such as shadows, borders and pixelation. There are several other options, but where is the fun in telling you everything about every possible menu!

One thing I feel I should point out, is that SSC allows you to edit a Screenshot as soon as you have taken it, from within its own editor. This is included in the default download, so no plugin will need to be installed to get this feature to work. This allows you to quickly add special effects like bluuring and pixelation and such.

Plugins are few and far between for SSC, but those worth noting are zUploader, and ColorCop Color Picker. These can be found from within the software interface, for quick and easy download and installation.

Who is this app designed for:

I would say this software is designer for a more advanced computer user. However, with a little bit of learning, it is very usefull for literally anybody who wants a nice, clean, feature intensive ScreenShot program.

Lots of features from within the software, and it is updated on a regular basis and is constantly getting more and more fun things added to its feature-set.

The support system is hugely powerful. Being able to login to the forum, ask your question, and receive an answer very quickly, especially when you don’t even have to pay for the privilage, is an amazing thing in itself.

It is my personal opinion, that the Preferences (Setup) menu, should be made a little easier to navigate, as even for experienced users, and people who are used to the software, things can be a little difficult to find.

I also think the software should include a few features such as “Facebook” and “Flickr” uploading. This is a must-have in this day and age.

Why I think you should use this product

If you are looking for a Free solution to grabbing Screenshots, and are sick to death of using ‘PrtScn’ + MSPaint, then SSC is certainly something you should download, and take for a test-drive.

How does it compare to similar apps

Put simply, if SSC includes a few basic features such as Facebook and Flickr uploading, and also makes its menu a little easier to navigate and setup, then I think it will be in a class of its own. As for now though, it’s certainly in the Number 1 slot for me.

I would like to conclude this short review of SSC by mentioning, that even though this software is DonationWare, it is by no means compulsory to actually Donate, to get full use of the software.

Autoscroll capture for windows too big for screen:
Also Scrollwindows are for the Freeware no problem. To large windows can be photographed also easy.
You can run ScreenshotCaptor from a usb thumbdrive without running an installer program: Just unzip the zip-compatible exe, you download, and copy it wherever you want.

Said about Screenshot Captor as an alternative

Price vs. Performance... Screenshot Captor asks for a donation and seems to have all the features of Snagit.
Positive comment • over 5 years ago • as an alternative to 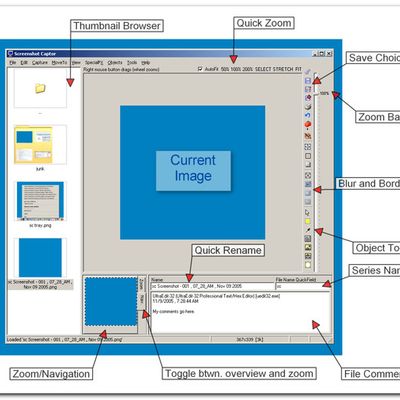 Our users have written 2 comments and reviews about Screenshot Captor, and it has gotten 40 likes

View all
Screenshot Captor was added to AlternativeTo by CIAvash on Nov 30, 2009 and this page was last updated Mar 26, 2021.