The ultimate screen capture tool. With Snagit’s capture, edit, organize and share technology… it’s easy to create engaging visuals that grab attention and keep it. Let images do the talking for you.

Use Snagit to capture any image you want straight off your computer screen. Enhance with transparency, callouts, and other effects to turn a simple screen shot into an eye-grabbing visual. Easily organize your images and use them again and again for other projects. Then show off your Snagit creations to anyone. Just add them to your documents and presentations… or share using your favorite applications.

It doesn’t take much to explain a concept or an idea with Snagit. The images you create do the talking. And the more you use Snagit, the more ways you’ll find to use it! 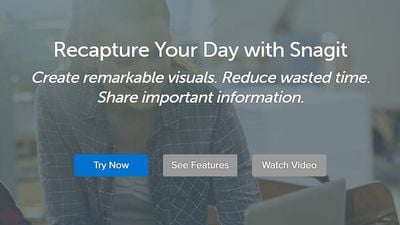 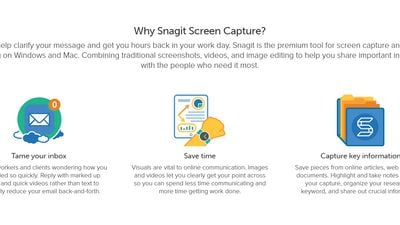 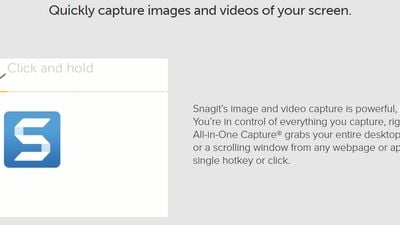 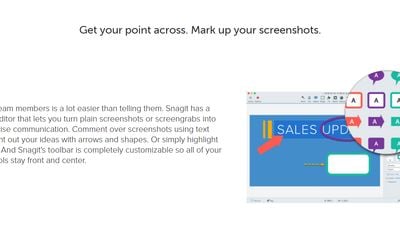 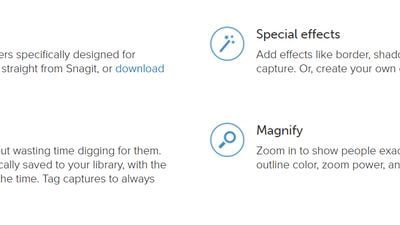 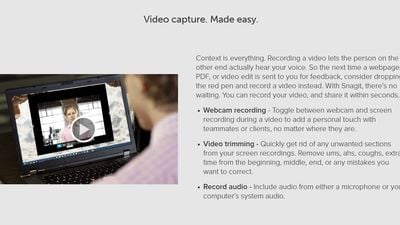 Our users have written 18 comments and reviews about Snagit, and it has gotten 195 likes

Snagit was added to AlternativeTo by Ola on and this page was last updated .

It is the best in its category to similar apps like

to which I've all tested

Tried all of those including PickPick. Snagit has them all beat, in all areas, most importantly in terms of convenience & flexibility.

i still haven't found a successor to snagit over the years, and i've tried a lot of them. some have been really quite good, but none have made the process so easy and added (light-enough) features that are helpful for enhancing the captures easily.

the only thing that truly bothers me about snagit, is that i cannot take screenshots in some games while playing them. i simply have to turn off the program and use the generic windows built-in screen capture to get around this annoyance. this really isn't much of an inconvenience if you're using steam, though, which implements its own screenshot system nicely. that really is the only thing i don't like about it.

i should add though, as many software publishers do, techsmith has been adding bloatware and bloated useless features while at the same time removing some quite useful ones over the years and versions. i will NOT upgrade to a newer version because of this. i have stayed at version 10 and have trying going up and down in versions to find that this is the best version for me. so as long as i stick with this version - i get the features and responsiveness i need, and haven't found the need for moving to another product.

if anyone can recommend one that does all the things that snagit 10 can do essentially, i would be happy to hear about it. to techsmith: it really has been getting worse and worse. if i were to review the latest few versions of snagit, i would definitely give it a negative review, but when i look at version 10 in particular, it really is the best for my needs.

I have been using snag it for over 5 years now. So far it was always my favorite tool to take screenshots and edit/comment them.

Since the last update, snag it got really bad. The performance is very slow and the editor it self crashed very often. Also using snag it with 4k screens got nearly impossible.

Snagit is my best screen capture and image/video editing tool for many years on Mac and Windows. So easy and usefriendly !

2 only negative points : Unfortunately, doesn't full support HEIF and HEVC files. OCR is not their strong point (DeepL free does it very faster).

I've been using Snagit for well over 20 years, at home and at work. When it works, it's quite good at what it does. It has a solid feature set, and the image editor is pretty good, and it has some features you don't find often, such as the incredibly handy "cut" function.

But video editing is practically nonexistent, and Snagit is infuriatingly buggy and finicky. I've reported bugs to TechSmith that they claimed they couldn't reproduce -- and yet I'd easily reproduced it on no fewer than 3 entirely separate systems.

The Snagit Editor is slow to launch (and no, I don't want it running all the time to prevent this). The hotkey configuration is a joke.

The other thing that enrages me about Snagit is the licensing / activation scheme and abysmal privacy. It's constantly making connections to various hosts (including analytics-related hosts and third-party hosts like nalperion.com), and you can't block these connections, or it will stop working.

And sometimes, Snagit decides to deactivate itself. I've had this happen after using System Restore. I'll run Snagit, and it forces me to activate it again. Beyond annoying.

And E-V-E-R-Y year when I update to the new version, it lets me install and use it without issue. Then, a month later, it tells me my trial period is over. They force you to use a new license, but they don't prompt you for the damned thing up front.

It's all so aggravating. I'm not sure I can deal with Snagit anymore, TBH.

Edit: I decided to remove Snagit today, and thanks to Total Uninstall, found that as a final insult, Snagit leaves a ton of garbage on the system -- program files, settings, logs, random mystery directories and files, the shell extension, registry entries, it's uploader service -- you name it. It doesn't really "uninstall" at all. The Snagit uninstaller actually ADDED a Snagit registry value on its way out. WTH?

Snagit is trash with a slick UI and a sizable price tag.

USE IT ALL THE TIME!

This program is excellent. I've tried ShareX but this one is robust and intuitive. Does image and audio recordings, screen captures, annotations. I got a free copy from my university, but it's worth the money.