SearchMyFiles is a non-indexing portable alternative to the standard "Search For Files And Folders" module of Windows. It allows you to easily search files in your system by wildcard, by last modified/created/last accessed time, by file attributes, by file content (text or binary search), and by the file size. SearchMyFiles allows you to make a very accurate search that cannot be done with Windows search. For Example: You can search all files created in the last 10 minutes with size between 500 and 700 bytes.
After you made a search, you can select one or more files, and save the list into text/html/csv/xml file, or copy the list to the clipboard.
SearchMyFiles is portable, and you can use it from a USB flash drive without leaving traces in the Registry of the scanned computer. The utility is also a part of

But UI/UX could be massively improved and simplified, such as hiding non-frequent options under an 'advanced' drop-down panel or 'more options' or such.

Another major downside is that when a text string search is found, it tells you the binary position in the file, which is utterly useless, and doesn't state the line number.

Another major negative is that it doesn't show preview of the lines where it found the match, such as the first few lines before and after - instead only showing a list of files where the match was found.
And if I remember correctly, opening the listed file also doesn't take you to the line where search text was found.

A better alternative is BareGrepPro - although unfortunately it's not free, and has a 5-min timer before it auto-closes.

This application could not compare duplicate files using hashing.

SMF-Search My File can do deduplication. SMF is better. 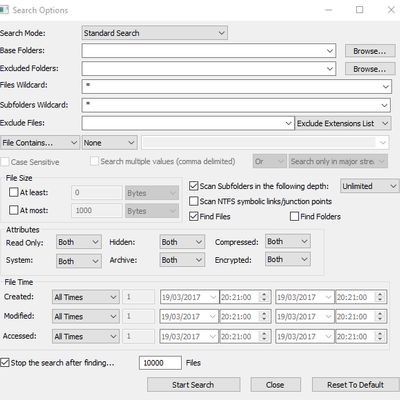 Our users have written 2 comments and reviews about SearchMyFiles, and it has gotten 31 likes

View all
SearchMyFiles was added to AlternativeTo by Abd Shomad on Jul 17, 2010 and this page was last updated Oct 6, 2021.