dupeGuru is a free and open source tool to find duplicate files on your computer. It can scan either filenames or contents. The filename scan features a fuzzy matching algorithm that can find duplicate filenames even when they are not exactly the same. dupeGuru runs on Mac OS X, Linux, & Windows.
Show full description ▾

Needed to delete 100GB of duplicates. Worked fast enough and simple. Cannot mark by creation date.
Glary Duplicate Remover filtered results by default. Which worked fine, until i wanted to remove all filetypes, and that search did not finish even after hours. Probably would work great on smaller folders though. Has more marking options.
Duplicate Cleaner Pro was slow but also works, and has more marking options.
Easy Duplicate Finder has a paywall beyond 10 duplicates.

Duplicate file finding and elimination can be tricky. dupeGuru is definitely a good tool to have but it should be just one of the tools you have since this app may be better suited for some situations you face when searching for duplicates. While other tools are better in other situations encountered in this process.

My earlier negative review was based on my experience with v4.0.4. With v4.1.0 I was able to get more useful results and have upgraded my rating accordingly.
I found the documentation a bit confusing, in particular the mention of "Picture blocks" in the topic "The scanning process", as I couldn't find this expression anywhere in the UI. Apparently it refers to the scan type "Contents" when applied to pictures. It would also be nice to find some documentation about installation: by default, the Windows version of dupeGuru installs itself under AppData instead of Program Files.
The results were comparable to those I get from XnView, which I find more useful for my purposes, because I like to review the duplicates individually before disposing of them. However, I can see the utility of dupeGuru if one needs to process a large quantity of duplicates, for which individual review is impractical.

P.S. I have reduced my rating again because of disappointing, inconsistent results in scanning music (mp3) files. In two versions of one album containing files of which about half were identical, DupeGuru rated all files a 100% match. This is OK, because the other files had only minimal differences. However, in two versions of another album, in which all files differed, but only in metadata blocks which weren't displayed in a typical MP3 metadata parser, DupeGuru found no duplicates. Since I didn't find any option for adjusting a match threshold, I assume that DupeGuru's matching criteria are very strict.

Great program worked on a HDD connected to the network and searched files in different subfolders.

I've also used it in the past on a USB drive after copying over family photos to see what dupes I had. I just learned to keep the family members drive structure to make it a bit easier.

Easy, no problems either Mac nor Windows, both works fine.

Too bad there is no Dislike button, I tried the Windows version, and didn't even start a search, why ? Because it's too primitive, unlike what it says, there are (in Windows version at least) no options to customize the search, all exclusion have to be done MANUALLY, if you have 100 sub-folders and want to exclude 20, you have to go ONE-BY-ONE and check them to be excluded, this is preposterous to say the least.
I sadly regret the time spent download and installing and getting frustrated as to why the docs are so inaccurate! 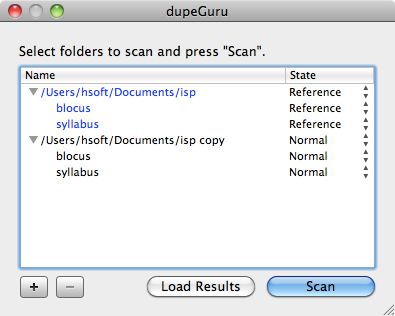 Our users have written 9 comments and reviews about dupeGuru, and it has gotten 136 likes