What is Send Anywhere?

A cross-platform file sharing service which allows users to easily share digital content peer-to-peer, in real-time, without cloud storage.
Unlike messenger or cloud based storage apps Send Anywhere allows the end user to send as many files, of any file type and size, as many times as they want, across Android, iOS, and Desktop. Send Anywhere utilizes p2p networking to bypass cloud storage thereby making the transfer process more secure and quicker. Furthermore, Send Anywhere requires no login or registration - all that is needed is a one time six digit code that will sync the sending and receiving device.

This simple, unlimited, instant file transferring app will make file sharing easier than ever before!

No signup or login required—all you need is a 6-digit key to pair devices.
Share any file type (photos, apps, videos, etc.), of any size, across all mobile devices (Android, iPhone, iPad, iPod) and PC(MAC, Windows, Linux) - https://send-anywhere.com

? How it works ?
? Sending
1. Select a file and click “Send”
2. This will generate a 6-digit one time key which you will share with the person you want to send the file to.
3. Stand by.
Tip: You can also send a push alert to one of the nearby/recently used devices in the list.
? Receiving
1. Enter the 6-digit one time key on the receiving device.
2. Enjoy!

? Remotely manage your PC files?
With the My Devices release, you can remotely manage every Windows and Android device that you’ve registered with Send Anywhere. This means you can access files downloaded on your Windows computer from your Android phone as well as send those files to another device. This seamless process further simplifies your file transferring needs.
Show full description ▾

Seems pretty awesome to me!

One of the reviewers, artexjay, stated that a Wi-Fi connection is necessary for this app to work, but I was able to send files from my desktop PC, which was Ethernet-cable based (not on wireless, that is), to my cell phone, which was connected ONLY to its data carrier.

Specifically, artexjay said, "Only problem is that you need wifi connection for this app to work, and transfer files."

However, I do admit there is the possibility that when I sent the file from my desktop PC, my wireless router sent the signal over to the cell phone anyway--despite the fact that the desktop PC's wireless option was turned off (as well as my phone being to set to data, only).

Just installed on a WIN 10 machine on my LAN and on a Android 9 Tablet I use as a media center controller - seamless installation ans setup on both device transferring files with 10 minutes.It deserves 5 if no issue creep up** Very Pleased especially with its simplicity **

You have to be online at the same time to do it.

just installed to attempt to transfer files from win 10 to Android 9 Tablet simple,fast and effective No HEADACHES :)

Its simply and brilliant and blazing fast. Mobile app is fantastic.

The could have been the Shareit Killer

It functions exactly like SHAREit , minus the ads and bloatware. Only problem is that you need wifi connection for this app to work, and transfer files.
It's very seamless and unlike Shareit, offers a much faster connection from devices, and even PC to PC connection, which with Shareit, at least for me never managed to do.
As of now PC version has annoying popup ads... 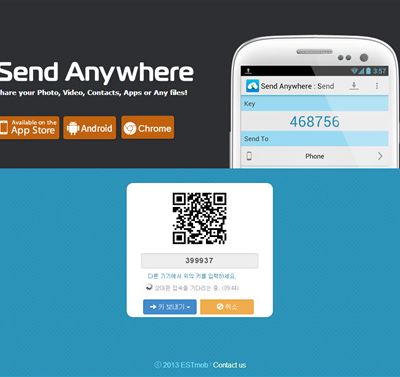 Our users have written 10 comments and reviews about Send Anywhere, and it has gotten 102 likes