ReText is a simple text editor for Markdown and reStructuredText documents with syntax highlighting and optional live preview.
It is written in Python using Qt libraries, able to run on any platforms (Linux and BSD are officially supported).
Show full description ▾

I dislike that retext has quite a messy UI, no formatting buttons for markdown.
The built-in previewer can render contents quite weirdly and the default CSS theme for webkit previewer is ugly. But if you grab a github css, throw it inside retext config folder and add it in the configuration dialog, then it works.

The editor itself is pretty strict to standard compliance (which is actually good) and you really want to get the LATEST release, because finally the webkit previewer can follow the focus. Zoom buttons in webkit preview would also be nice. You can zoom in built-in previewer with mouse wheel, but ... dang its render is ugly. :X

The editor has translated UI and responds quite quickly in textedit box. Being built on Qt, it also integrates very well in your environment.

But I personally prefer ghostwriter, since I discovered it also to feature live preview.

There are many Markdown editors which are more powerful and prettier. But ReText is slim and quick and is available on Ubuntu from the repository.
Perfect for opening small Markdown files for reading and editing; but for writing long texts and if I wish for a beautiful graphical user interface, I prefer something like Abricotine or Typora. 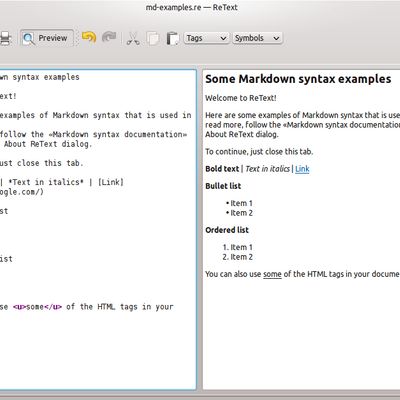 Our users have written 3 comments and reviews about ReText, and it has gotten 45 likes