NexusFile is a file manager for Windows. You can manage many files very fast and easily. NexusFile will increase your computing performance. If you still use Windows Explorer, you must try this one.

This was posted on the main website's forum for this application, but applies here as a comment/review.

I have used an excellent file manager for many years until now called ExplorerXP (explorerxp.com). The issue was that nobody has updated that program in many years and also it's so old that it has visual conflicts with a new theme I use with Windows7.

I decided to look for a new compatible file manager. I formed a list of every program on the market available as of today, including both freeware and commercial products. After researching each one, I found that Nexusfile is at the top of the list. It has the most features I'm looking for, similar to ExplorerXP, along with new ones, that I enjoy trying out and visually it looks absolutely stunning, the best by far, especially the black skin and color scheme (aside for my improving the folder colors by changing them from red to white).

Here are some features I would really like to see in upcoming releases (these were implemented in ExplorerXP):

Having said all that, fantastic job on making the current best file manager in the world, managing to beat out even commercial products for free!

UPDATE 22/11/11: After restarting my PC for the first time since installing Nexusfile I saw that the folders I had opened from last session had re-opened on Nexusfile startup (this didn't happen previously when opening it). Also I noticed the files remain Date Sorted as I had them before closing, which means it both remembered the sorting options in each folder along with which folders were open from last session, which was a pleasant surprise.

Solid capability-wise, but unfortunately crippled by a garish interface and poor system integration.

I have to agree to disagree with fotzenlecker, I actually really like this program, the themes are dark, but that is one of the things I like about it.
I don't have the same problems, it runs VERY fast when I used it. However I do REALLY like this, it does have a few issues, and definitely needs SOME rework.
For instance I can't seem to do anything that would need admin privileges without starting up the program with admin privileges, it needs the ability, like explorer++, to ask for admin privileges when you do something like delete a file in program files without starting up the whole program with admin privileges and then going to the folder again.

Some other issues are you can't set it as your default file manager (I like to completely replace windows explorer), and you can't open a folder with it, if you do, it just opens up the default folder, so say if you click on my documents on your desktop and have it open as nexusfile, it doesn't open nexusfile in you documents, it just opens whatever nexusfiles default page is.

Horrible, sluggish interface. The menus are transparent and cannot be set opaque. When opening a menu, there's a delay in drawing the menu items. Renders the whole usability useless. Also, the design cannot be switched to anything else than black as for the inside of the window. You can only switch the color of the outer frames and borders. This software needs a lot of rework. 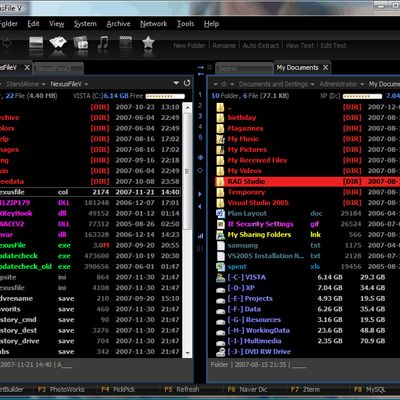 Our users have written 4 comments and reviews about NexusFile, and it has gotten 32 likes