Grindstone is a desktop application, produced by Epiforge Software, that allows users to create and organize tasks and to track time. It includes a range of other features that supplement this primary functionality. The software is currently offered as a free download for Microsoft Windows users. Epiforge Software has announced plans to release Grindstone on Mac OS, and a compliment to the software which would allow pooling data from multiple users.

Major features include a stopwatch to allows users to select a task theyre working on, during which Grindstone will attribute time to that task. The Stopwatch can detect when the user leaves their computer and ask them how to reconcile their time away when they return.
Profiles allows the user to create profiles as a way of separating their tasks into different areas. Tasks can be moved from one profile to another if necessary. It include various reports that display the users time in the different way (ie a three-dimensional pie chart, time sheet, invoices etc). Time sheets and invoices generated can be printed, or exported as Microsoft Excel spreadsheets or PDF files.
Show full description ▾

Grindstone's ease of use and built-in reporting capabilities easily makes this a fantastic free tool widely used throughout my organization. Time sheet aggregation that comes at a fairly steep cost unfortunately cost this application a star.

A piece of software so horrible that they do not tell you features, nor how much the Pro version costs until you install the freemium version on your computer. Go ahead.. find pricing. The video instructions are recording in 4K for an app that take up about 650px wide. The one comment that says it's nice -- only commented on this one software.

The software is somewhat annoying but the tagging feature is advance and time economic still there could be automation and better better generated graph its not very insight aggregation. Most what's show in te graph isn't inspirational or useful. Maybe integrations could make them useful.

I've used Grindstone for years. Started using it back when Grindstone 2 was a puppy.

Grindstone 2 has a killer feature called "autopilot."
When autopilot is active, Grindstone logs the window title of every single window you open. (And the entry includes the exact time that the window was opened, remained focused, and then lost focus/was closed.)

(And yes, you can dial down the number of windows it reports on by limiting it to reporting only entries longer than x seconds/minutes/hours...)

But sadly, IIRC, Epiforge (the developer) seemed to react impulsively, perhaps angrily? (IMHO) to a software review that said the app was "bland looking".

(interface was perfect for me...)

A year or two later, Epiforge came out with Grindstone version 3 - it looks like someone dropped too much blotter while they coded the new interface. Waaaay too much blotter. Sweet Jesus, they need to read "Don't Make Me Think" (book on how to design (webpages, but same concept). It teaches you how to "follow design convention" so your users don't need a PhD to figure out how where the he** anything is.)

The interface also makes the app look juvenile. I half expect blinged-up warriors to blast their across the screen and obliterate the entry you just "deleted."

But worst... they chucked autopilot completely in version 3.
So in order to track the time for anything, you must manually start and stop the clock.

I switched to TimeSnapper about 2 years ago for recording my activity (literally) and the AUTOMATIC screen shots it takes helped me get paid for time I worked which my EX-boss thought he could get away with not paying me for. It's hard to argue with images. 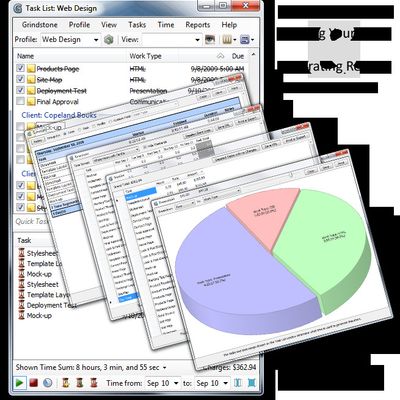 Our users have written 4 comments and reviews about Grindstone, and it has gotten 16 likes