Other apps like ogyoutube do not have overlay.
Just delete the original YouTube with root and you will have a perfect experience

The best mod version of youtube, newpipe is alternative, don't be confused.

It has background play, ad blocking, and doesn't rely on play services to run, so you can get it on an amazon fire.

In recent versions the watch history is not saved. I didn't find any solution to this issue. Anybody else facing this problem

I was trying to figure that out! I figured it was something I did regarding changing my g..gle history settings or something. I did not fully consider it might be a YouTube back-end and/or Vanced change in code or inter-operability/compatibility;
I hadn't (until today) updated Vanced in a couple years-ish. My "Watch History" stopped working on or about Sept.1,2021... I might check out XDA for a solution because this feature was pretty smooth and appreciated (if not clutch!)... it made switching between devices even more seamless!...butter-smooth cross-platform transitions. Now I just add whatever video I want to watch on a different device to my "Watch Later" playlist, which is annoying and less-user-friendly now that it's serving dual-purposes (quick save to "watch later" AND "watch later" on other device) and thus growing in size rapidly. I have tried using a "watch later(continue)" to serve the watch history purpose– it's clunky relative to having watch history integration.

Not really an alternative, but a mod, and a rather nice one at that. I did have an issue with having to uninstall and reinstall this and the associated log in package when I changed my password, so that can be a nuisance. Rather nice though, and it doesn't appear to have as many tracking issues as YT proper. There has not appeared to be a sync between what I watch via Vanced, and what I watch on desktop.

Minor con: You can't remove a song from a playlist, and mother of god, YT playlists are insane. I said Minor Threat, and it plays the BeeGees good lord man.

There are some small bugs that need to be ironed out. Otherwise great app, I refuse to pay for background play.

"I refuse to pay for background play" 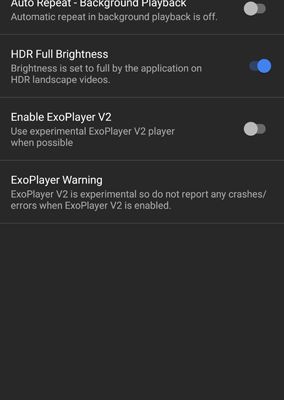 Our users have written 8 comments and reviews about YouTube Vanced, and it has gotten 65 likes