Xfce (pronounced as four individual letters) is a free software desktop environment for Unix and other Unix-like platforms, such as Linux, Solaris and BSD. It aims to be fast and lightweight, while still being visually appealing and easy to use. Among its main features are its customizable panels on which users can place various launchers or panel plugins. Xfce is also accompanied by a large collection of goodies, which consist of various applications and panel plugins designed mainly for Xfce.
Show full description ▾

Lightweight, quite appealing, simple, intuitive, stable, and keep you focused on what you are doing.

XFCE is a lightweight desktop environment for Linux and BSD. It requires few system resources and therefore runs faster on older/slower computers than do some other desktop environments, such as KDE Plasma. It is not as light as LXDE. XFCE is moderately configurable, but is also a little older in its appearance than other GTK-based desktops, including Gnome and Budgie. However, it is mature, stable and well supported. It can be installed on any Linux distro in addition to whatever desktop is already available by default. However, XFCE is the default desktop environment of Xubuntu and Manjaro, amongst others.

I would recommend you use XFCE if you have an older computer struggling to run KDE Plasma, Budgie, Deepin or Gnome. However, XFCE's cousin, the MATE desktop environment has a similar layout and philosophy whilst being a little bit more configurable.

Been using it sporadically for the last 6 years. It is lightweight performs amazingly and when I started trying other Desktop Environments it was instant regret!!!

Best desktop environment for Unix/Linux I know of.

It's light-weight, fast, amazingly stable, feature-rich and beautiful. What more do you want?

Add a simple dock like "Plank", use Greenbird/Bluebird as the application theme, use ElementaryOS/Numix icon themes, and you're good to go.

How about /configurable/?
The settings dialogs look like jokes. Like 0.1 software that’s in early alpha and just got the bare minimum running.
It may be that that is the deliberate goal of Xfce… to appeal to those who can’t handle making their own choices in life because they’re too afraid … but then Xfc is just Gnome (translation: ”bad”).

Debian Elementary XFCE: Best Apps for a balanced system •  Oh My List •  Software I use on GNU/Linux •  The Lightweight Champions (GNU/Linux Distros) 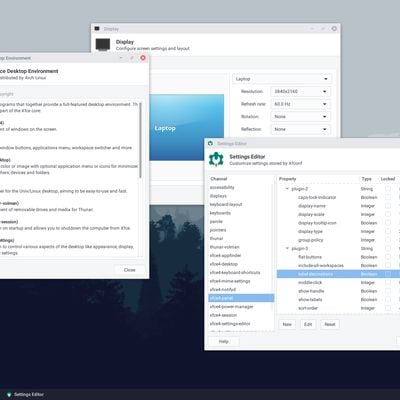 Our users have written 5 comments and reviews about Xfce, and it has gotten 337 likes