What is Uranium Backup?

Originally started as a personal project of the Italian programmer Alberto Tozzi, Uranium gained traction thanks to the adoption by several small and medium Italian businesses.
Now the software is distributed in over 70 countries and translated in 12 languages.
Show full description ▾

Surprisingly good backup application. It has tons of features, comparable to cobian or other advanced software. On the other hand, it is very easy to operate and thus a good choice for semi-tech guy. Paid version is little expensive - 80 bucs.

Pictures are only from the gold version , **not from **the free one (freeware)

Many thanks to the user p4nzer_pro for presenting Uranium Backup on AlternativeTo.net.
Since a long time I am looking for a portable backup app with functions like Cobian Backup but without the necessity to have admin rights in the installation process. The most convenient portable app for this purpose is Duplicati, but Duplicati can only backup complete folders, but no list of specified single files as Cobian Backup and Uranium can do very easy.

In http://www.uraniumbackup.com/faq.aspx you can read:

Can Uranium be used as a portable software ?

Yes, Uranium is a portable software and you can run it even from an USB pen drive. Although there is an installation procedure, all the program's functions are included in a single and small .exe file, that doesn't need any other file or prerequisite in order to work.

I tested, if I can copy an installation on an USB-Drive or DropBox-Drive D:\PortabApps\Uranium\Uranium.exe to another computer e.g. in the folder X:\PortabAppsPC2\Uranium\Uranium.exe, where I did never the setup-procedure with UraniumBackup8setup.exe. If an application is really portable, there should not exist an entry in the programs-list in the system control, which exists, however, after the setup of Uranium.
The result after transfering Uranium to another PC was not verifying, that Uranium is really portable.

I could see an Uranium user-interface by running the file Uranium.exe, but the language was Italian and not German as in my primary installation. There was no menu-entry to change the language to German as in the primary installation. This behaviour is caused by 2 lines in X:\PortabAppsPC2\Uranium#Uranium.ini which indicate, that there are 2 important files in a C-folder instead of in X:\PortabAppsPC2\Uranium:

or in Windows XP:

or in Windows XP:

I suggest to the Uranium-developers

Then the very unique (because backing up a list of specified single files) and excellent Backup-App Uranium should be really portable. 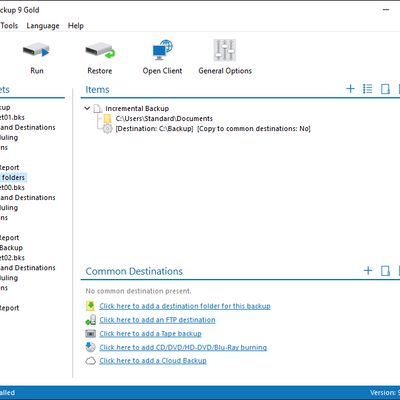 Our users have written 4 comments and reviews about Uranium Backup, and it has gotten 14 likes