Point & click to forbid/allow any class of requests made by your browser. Use it to block scripts, iframes, ads, facebook, etc. uMatrix: A point-and-click matrix-based firewall, with many privacy-enhancing tools.

The repository has been archived and the development has been stopped. https://github.com/uBlockOrigin/uMatrix-issues/issues/291 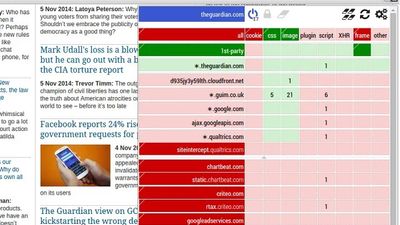 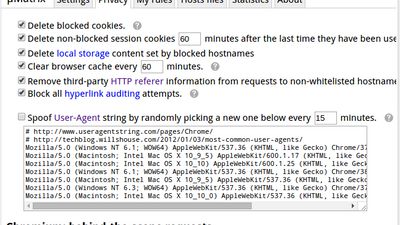 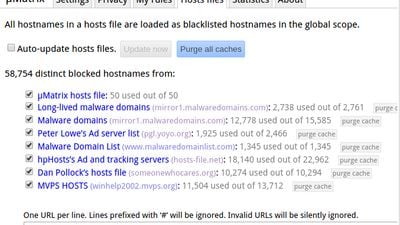 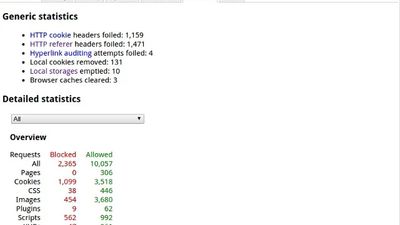 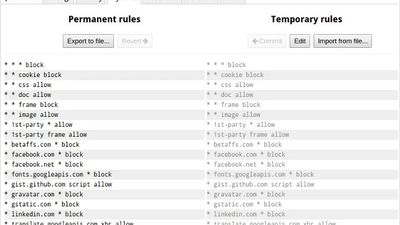 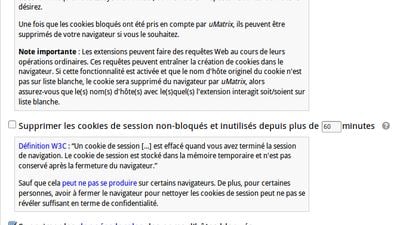 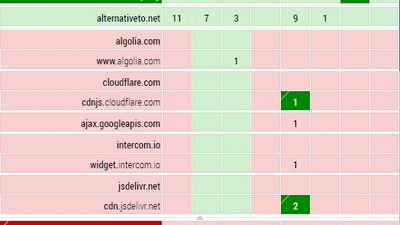 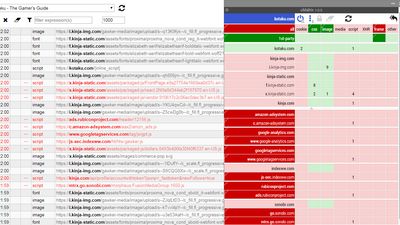 Our users have written 13 comments and reviews about uMatrix, and it has gotten 166 likes

uMatrix was added to AlternativeTo by quorum on and this page was last updated . uMatrix is sometimes referred to as µMatrix.

I found this add-on accidentally on Firefox Profilemaker. Before it, I used NoScript on Firefox and ScriptSafe on Chromium-based browsers. But uMatrix has changed everything. The only idea that I thought in that moment, why no one didn't make something similar before. Look, every such extension, whatever the platform, uses simple conception - blocks third-party scripts and make exceptions rules for domains. And for some fucking news sites which use a dozen of third-party scripts just to show image and video on themselves, it very bored - open extension window, add some exception, update, again and again. And often new domains are requested only after adding exceptions for others.

But uMatrix works differently. First, it keeps history of changes within working tab, you can press Update again and again, and extension area will not change but new requests will be added. You always will see which domains were requested before the update and how it changes the result. Then, every rule what you created will be saved in temporary rules list. So you always see which rules are working globally and which you made in this session and could revert them. It's very-very handy when you trying to find out some key combination, for example for playing embedded youtube video. Moreover, uMatrix allows you to chose what type of content you allow to load on the current domain from other. For example, it could be Referrers from a subdomain of a domain. But any other type of content will be forbidden, and even from other subdomains. But the rule also can be global for a domain. It's hard to describe, you should try. You see it in the handy Matrix view... 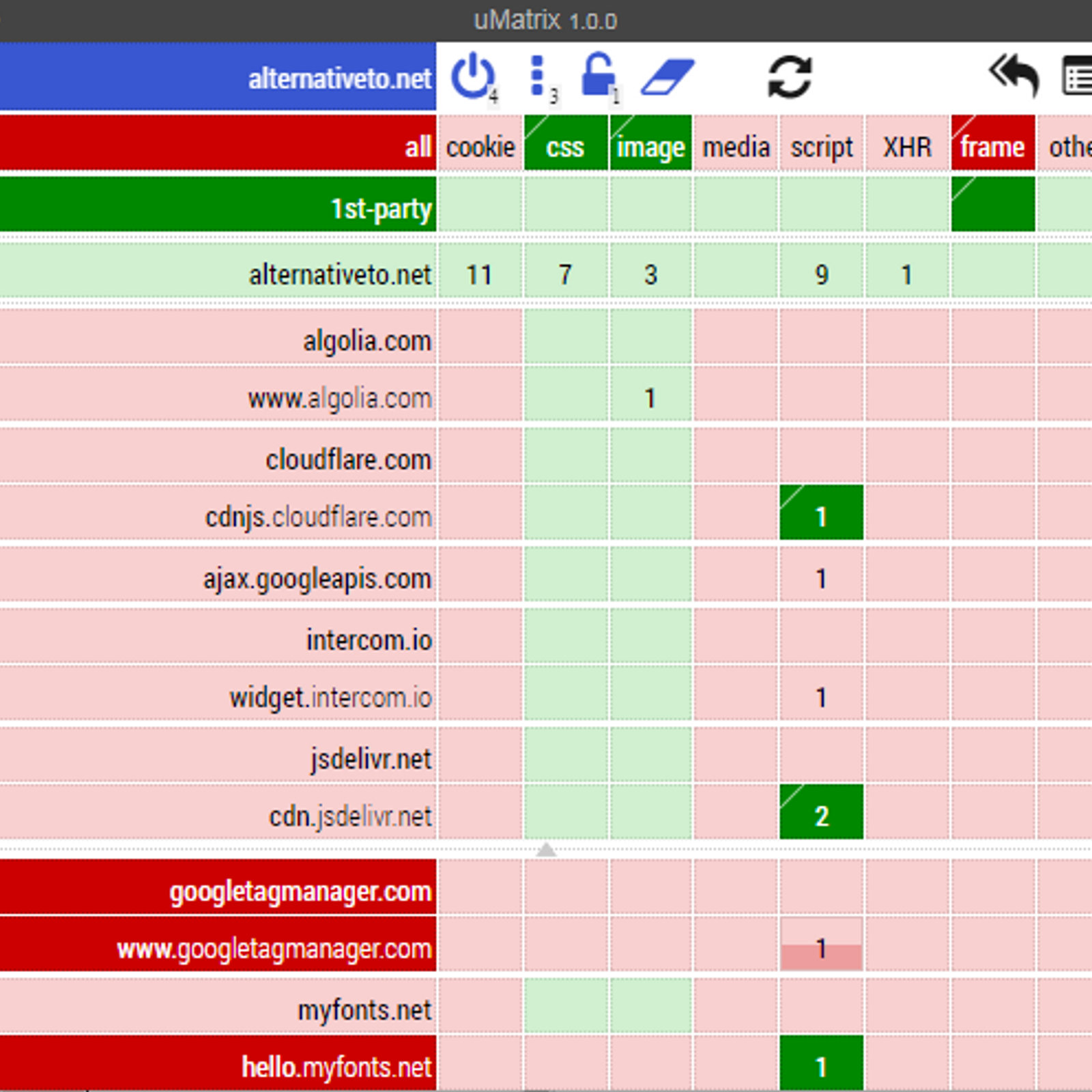 ...and could edit after in text form. 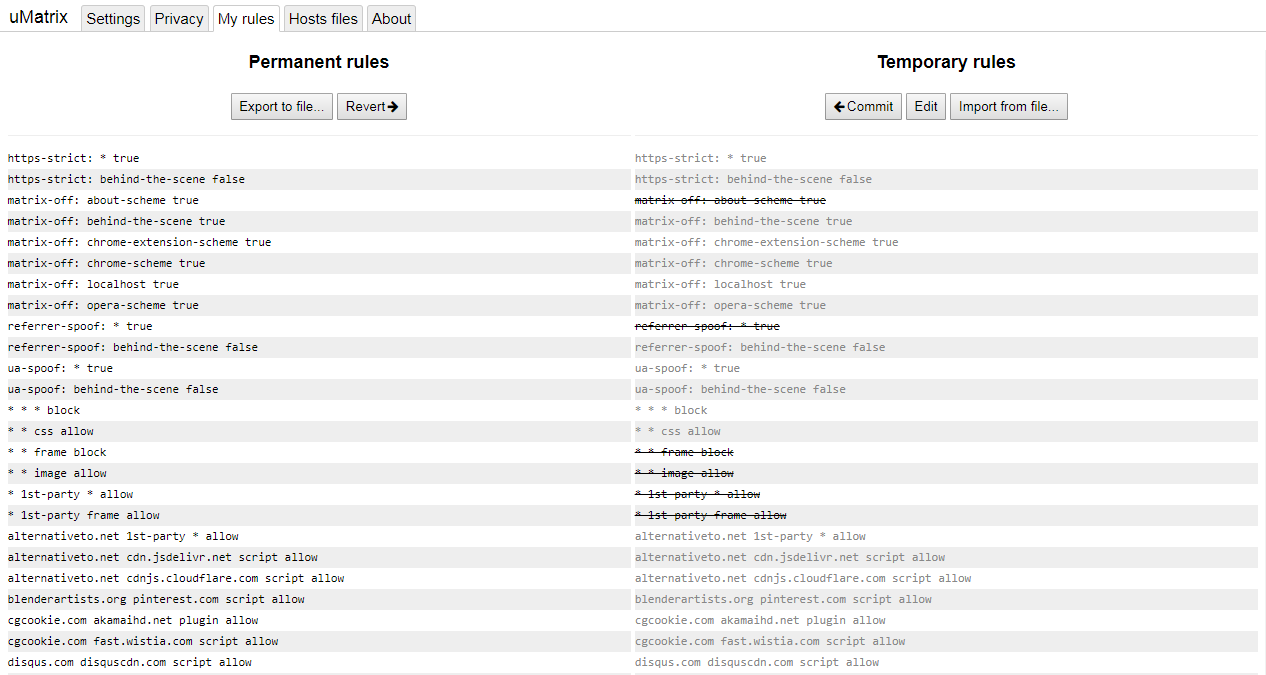 You also have the ability to download filter lists, for automatic block suspended domains. Everything just like in beloved uBlock.

Script blocker extensions were never so handy before, as I found it! Just try it, and you will never to look on other.

The first add-on I get with a fresh install of a browser. Completely revamps your idea of what makes a good add-on: it is extremely light, intuitive, configurable, and comprehensive. You do not want to miss this, and once you step on this train you'll never want to get off.
This is indeed a more interactive add-on than other ad-blockers. So if all you want is an ad-blocker, use uBlock Origin, which is by the same author (gorhill) and built similarly, but it can be more of the Install, Configure, Forget type of add-on. The purpose of uMatrix is its fantastic ability to fine-tune. Do you want to block scripts from a certain site only on certain pages? Do you want to block all ads from a certain site except on certain pages? Block everything except first-party elements? The GUI makes this ridiculously easy to handle, as opposed to No-Script which was the main go-to for FF script disabling prior to the arrival of uMatrix. Policeman was an add-on that better paralleled the capabilities of uMatrix, but not the usability and the production value that comes with a larger user-base (it has at the time of this post not been updated for a year). -~*`uMatrix`*~- block ads, block scripts, block images, block/delete cookies, spoof UA Is this the be all and end all of privacy add-ons? Try not to cry. (I did, when I realized it was ported to firefox in 2015)

I found it complex with little explanation to follow. Yes, there are things you can get intuitively rapidly, but to be able to hone in on specifics became elusive.

I got an overview and controll over my requests.

You can still use it without any problem despite the comment above.

uMatrix is the most important browser extension next to uBlock. Very sad, that it's discontinued.

I put off trying uMatrix for a while because I thought it would be a challenge to learn, but it's actually very simple. The only tricky part is figuring out what elements can be blocked without breaking the page on certain sites. So in that respect, it takes more effort to configure than your average ad blocker, though the default settings work well for the majority of sites. Now that I've used it, I don't know how I ever managed without it. It gives you total control over everything that is loaded into your browser. Install uMatrix and Cookie AutoDelete in LibreWolf and you've got all your security and privacy bases covered.