UltraVNC is easy to use and free software that can display the screen of another computer (via the Internet or a local network) on your own screen. The program allows you to use your mouse and keyboard to control the other computer remotely. It means that you can work on a remote computer as if you were sitting in front of it right from your current location. This can be used for a variety of troubleshooting purposes and contexts, from helping a friend to professional customer support.

If you provide computer support, you can quickly access your customer's computers from anywhere in the world and resolve helpdesk issues remotely. This makes it easy to build rapport and consumer trust in your product.

With add-ons like SingleClick your customers don't even have to pre-install software or execute complex procedures to get remote helpdesk support.

UltraVNC is free for ALL usage, both personal and commercial.
Show full description ▾

I am using it instead of TeamViewer.

/I'm using it with NoIP/

Well, I am not using the Server function. I only use the viewer.
Tried TightVNC and RealVNC and this one is the best to access my local server. Very good transcoding speed, for this tiny client. 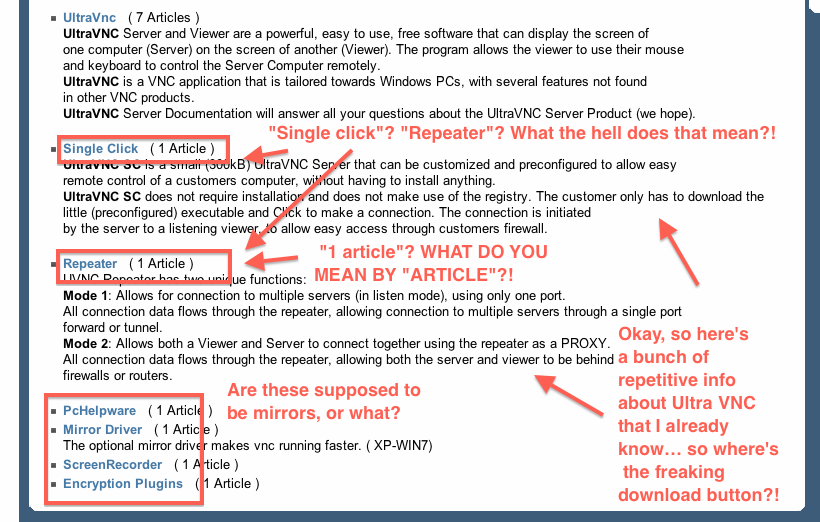 If you click "UltraVNC" on the top of the page, and then click through two more (seemingly unnecessary) webpages, you end up here. 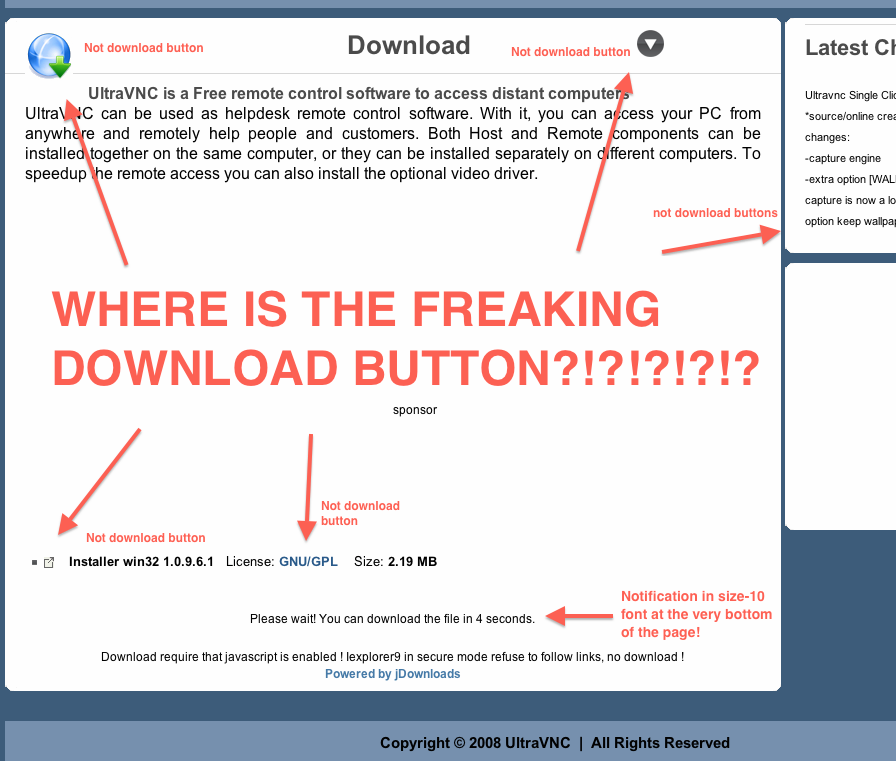 Believe me, this was very confusing the first time I saw it-- the notification at the bottom is almost unnoticeable. The design of this page is more like the webpages of 4Shared or Hotfile, not of a website for legitimate software like UltraVNC. I ended up just downloading it through FileHippo... seriously UltraVNC website, Y U SO CONFUSING?

Seriously, you should ask for a refund. sigh

You'd think that UltraVNC would actually want a lot of people to try out their software, instead of forcing new users to jump through a bunch of hoops just to download it at all.

Not only is it ugly and obfuscated, the Download button at the bottom of the page DOESN"T EVEN WORK. You click it and it pops up their home page in a new tab. Idiots. If they can't even make a working website, why should I trust them to run networking software on my computer?

It's been improved since then, but I agree that it still sucks. The whole site looks and behaves like crap, and could use a major overhaul.

Though quite effective once it is set up, UltraVNC's approach to setting up remote screen viewing can be considered cumbersome to even veteran computer users, making one of the most prominent uses for remote computer access software, remote troubleshooting, best left to another app. The likes of AnyDesk are more viable for that use case.

I've been (sadly) reliant on this software for some time and have only stuck with it because of the collaborative nature by which it is being developed. It is an active forum, but it must be said it's the same few people who report bugs in all the time, of which I was one - very much of the belief that together we could contribute to an awesome application

I'm a huge fan of the open source principles, but say for example, if the primary developer is permanently high, there's only so much the community can contribute, short of an intervention...

What's completely disheartening, and why this project should be avoided, is the main (or only) developer's modus operandi. Put simply, he's not a completist, so this project will only ever be partially useable. It is unarguably true that older versions are more stable than newer ones. Of course, new operating systems introduce new problems but the communication layer between client and server should be isolated from this. Yet, there are continual instabilities, bizarre behaviour, very tricky to reproduce bugs, memory leaks, inconsistencies between packages... you name it, any numbers of versions have got it

Do yourself a favour and adopt any other project; it's guaranteed to have far more organised and sensible developers behind it

RealVNC really should be the best VNC client for Intel AMT since they collaborated on the built-in VNC server, but I've found it to be very flaky - RealVNC often loses the connection, has all sorts of graphical problems, sometimes skips or refuses to listen to key presses, lags and so on.

So I finally decided to give UltraVNC a go, and to my great surprise it works a LOT better in every respect. Doesn't lose the connection, has no graphical problems, doesn't ignore key presses and also has a much snappier response (to both client and server actions). As a bonus, it also automatically scales the remote window according to the dpi setting I have in Windows (I have a 4K screen and use 150% dpi scaling). Sure, RealVNC can also scale, but its implementation sucks (it doesn't resize the window automatically, so I had to do it manually every god-forsaken time).

Before Remote Desktop became good (i.e. in Windows 7, although dpi scaling support was first included in 8.1 I believe), I used UltraVNC for a long time, so I don't know why I thought RealVNC would be better for Intel AMT. Silly me, should have gone with UltraVNC from the beginning! ;)

Our users have written 8 comments and reviews about UltraVNC, and it has gotten 265 likes

View all
UltraVNC was added to AlternativeTo by GoogleOla on Mar 14, 2009 and this page was last updated Oct 5, 2020. UltraVNC is sometimes referred to as Ultra VNC.