What is Patch My PC?

Patch My PC is a small portable application that updates third party applications and Windows updates. It’s critical to keep software up to date to ensure vulnerabilities are patched. There are currently almost 100 third-party applications that Patch My PC can silently update, and the list is growing with each release! 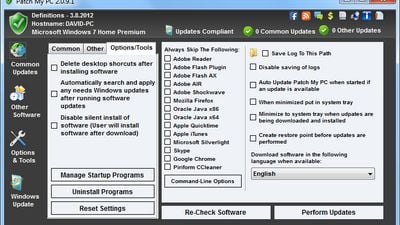 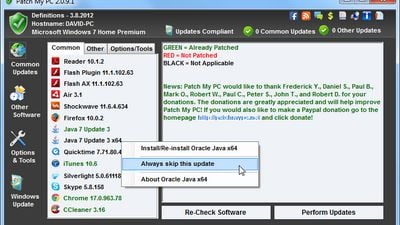 Our users have written 6 comments and reviews about Patch My PC, and it has gotten 93 likes

Patch My PC was added to AlternativeTo by lucasffg on and this page was last updated . Patch My PC is sometimes referred to as PatchMyPC.

Do exactly what it meant to: install and update with one click. Just using it recently but seems to work perfectly.

I have been using it for 2 years, it does its job perfectly, I always set it up to scan for software updates every 5 days and to run silently, and each week while working in my computer I see a new shurtcut from an installed software on my desktop, then I know it ran and updated everything it had to update, I give it 5 stars even if it doesn't have all the softwares that I have in it's database (doesn't have Nmap and balenaEtcher, and others that once I had installed), has 300 apps in it's database. Overall it's a must have app in your PC, Chocolatey to download softwares and Patch my PC to keep it updated.

This program is mediocre at best, and the developers are a bunch of lazy @$$3$ that can't take criticism, don't listen to users, and refuse to fix the many, many issues it has. I've used it on and off for a few years and consistently for the past few months, and I'm done with it. While it generally works well, it sometimes has major issues, like when it crashed explorer.exe creating a restore point (granted, this may not have been PMPC's fault, but we'll never know, since my report of the issue, like everything else, was completely ignored by them) or, just now, when two different programs got stuck for 15+ minutes each on the install phase before I finally killed PMPC and installed them manually, which went quickly and without issue.

And as I mentioned, it has lots of issues, yet every time I've brought them up in the forums, there has been no response by the admins. As if that's not bad enough, I actually wrote a script to deal with one of the issues and posted it in response to someone else asking about said issue, and the admins removed the thread. I posted in a couple other threads, one commenting about their removal of that thread and another in which I pointed out to them that their statement that it wasn't possible to do something extremely basic was just another ridiculous excuse and avoidance by them of actually fixing the software's problems, and explained how it could be done. When I just went to the forums to look into the newest issue of getting stuck on installing multiple programs, I found they have closed my account and deleted all my posts, including the one I posted when I first tried it out a few years ago and made several feature requests, none of which have been added to this day by the way.

Regardless of if the software worked well, which it doesn't, this is unbelievable behavior, and due both to their complete disregard for their users (not just me, but those I tried to help by removing the posts providing them solutions to their problems since the devs refused to help) and the complete instability of the software, not to mention the various other issues--like mixing up different product versions, showing software you've told it to ignore as needing updates, and reporting a successful update when the update was not successful--I'd strongly recommend just avoiding it. And if you do insist on using it, absolutely DO NOT give these people money for their inferior product with worse than zero support.

I'm not sure what to think of it. I guess it is portable.. it doesn't show in my uninstalls. It showed under Common Files. It didn't put a desktop shortcut. Anyway, I ran it the first time.. it hung on the Adobe Flash issue (Adobe Flash discontinued and I guess I should uninstall it), but it did nicely with other things.. I liked it.. But I got a msg error after a restart when I tried to run it again. Defender nab it? Sent screenshot. I downloaded and ran it again ..just to see.. but I'm not sure what to do from here.

I've been using Patch My PC for a while and it has been very useful. I use it mostly for installing apps (admittedly, it doesn't have everything I need, but then, neither does any other such program, and 300+ apps isn't bad). I also use it for updating apps, where it saves me a huge amount of time and hassle. Have recently switched on the scheduled, silent update option but have not used it for long enough to be able to judge performance. Still, if it runs half as well as the interactive GUI, it'll be more than good enough for me!

can run scheduled, silent downloads and installs, auto udpates itself, big selection of apps, uses local repository if the current version is found (good to run on a usb for lots of computers)