You should have full control over your data. We help you achieve that: a safe home for all your data. Secure, under your control and developed in an open, transparent and trustworthy way. We are Nextcloud.

Nextcloud offers industry-leading on-premises file sync and online collaboration technology. Our expertise is in combining the convenience and ease of use of consumer-grade solutions like Dropbox and Google Drive with the security, privacy and control business needs.

Our self-hosted solutions ensure you know where data is, who has access, and that even meta-data does not leak.

Security is Nextcloud users' greatest concerns and our prime advantage over competitors. Nextcloud features a host of unique, innovative security technologies from brute force protection to advanced server side and integrated end-to-end, client side encryption with enterprise-grade key handling and a wide range of security hardenings. Our security has been reviewed by trusted third parties and is backed by a USD 5000 Security Bug Bounty Program, providing the confidence that data meant to stay private will stay private.
Show full description ▾

I love open source software, and in the story of NextCloud and its OwnCloud roots, I side - overall - with NextCloud. For reasons of freedom and openness and trying to make the world a better software place. But... I won't use NextCloud in the near future and the reason is that my needs aren't met by the NextCloud client. It seeks to allow me to sync my files between multiple computers. But I have - literally - hundreds of thousands of (very small, ie <100kB) files to sync. And the NextCloud client can't cope with this. It tries to catalogue everything and gets stuck, lags, and mashes up the sync. That was the case with OpenCloud's v9 client and it's true of NextCloud v11.

I love the idea of NextCloud, but it doesn't work for me.

If you're not a special case like me, try it; I think it might be worth your while, so you can escape the tyrrany of evil services like Dropbox and Google Drive, who have your number, can read your files and must give it to the NSA if asked without telling you.

Yes, syncing hundreds of thousands of very small files is a though challenge and the current client isn't super good at it. However, we have made progress already and are working on a more complete solution - be sure to check it out again in half a year or so ;-)

The best solution for my private cloud: more configurable and stable than others.
The best for help make my docs really privates!

Your data is yours. Not for Sale by and for cronies or corrupt Governments !!!

It's nicr it has Apps for all mobiles devices (Android and iOS) for backups of contacts and photos and documents, and replaces also my FTP-server. No vendor-cloud necessary anymore, my pics get sybchronised into my nextcloud automatically as soon as in a WLAN. :)

It's a versatile tool, and it runs generally well. I use it to replace FTP-services.

I like Nextcloud as it seems to work quite well. It has tons of features, looks nice, and an active community. I'm just starting out with it, but so far it seems to match up with what I want extremely well! 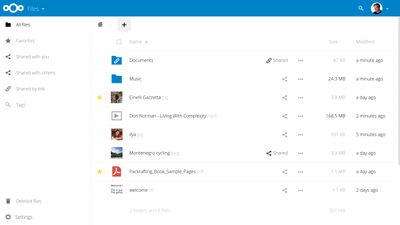 Our users have written 78 comments and reviews about Nextcloud, and it has gotten 837 likes