Microsoft Office Suite, is a database management system for Windows that combines the relational Microsoft Jet Database Engine with a graphical user interface and software-development tools. Microsoft Access stores data in its own format based on the Access Jet Database Engine. It can also import or link directly to data stored in other applications and databases.

It is a GUI frontend for editing mdb files, which are stored in JetSQL format. 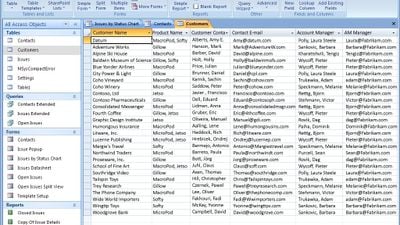 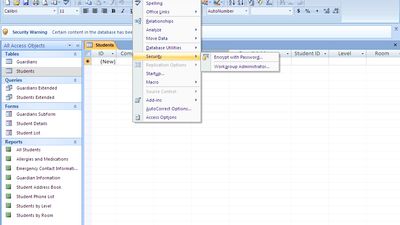 Our users have written 5 comments and reviews about Microsoft Office Access, and it has gotten 69 likes

Microsoft Access is, unusually for a Microsoft product, pretty much completely without competition, and has been for way back into its past. It's not just a complete relational database system, but thanks to its powerful form designer and programming interfaces, also a great rapid application development tool.

The RDBMS side offers very user-friendly ways of working on your relations, queries, views, and reports. In the background, though, Microsoft has a team of experienced engineers working on the underlying tech. What you often hear as criticism from information systems circles is that Access is too liberally violating RDB design principles for the benefit of novice users and comfort of use. However, look deeper into those criticisms and you'll find that Microsoft is not dumbing down databases for commercial reasons; the engineers think about and justify their decisions. It's just that they decide to take care of some stuff automatically in the background.

One popular example are the multi-value foreign key fields. While seemingly violating the First Normal Form property of relational databases, it's in fact just "UI sugar" for an implementation that does it the proper way, i.e. a separate relation to connect the two fields. What's important is that all of these apparent "tricks" are easily mapped to other RDBM systems should the need arise. Access is refreshingly aware about not locking in user data, something we're not always used to from Microsoft software. Migrating your data to other systems (or migrating them from elsewhere into Access) is generally very easy. In other words, you can quickly set up your proof-of-concept database project, without having to worry about a scenario of being locked in when it gets too big or successful. You can even keep using Access' forms and RAD tools as a frontend while connecting it to a different database backend, such as a "real" SQL server.

Microsoft Access is an excellent tool for anyone who works with structured data, whether it be professionally or just manage some sort of personal collection. I especially urge those to take a look who like abusing Excel for that purpose! It has its flaws and bugs, but it was an excellent piece of software from very early on. I've loved using it ever since I discovered it around the time of Windows 95 as a young one, and I still use it for lots of personal projects today. It's included in the Office 365 Home subscription, which is great, because it always used to be a rather pricey tool since it wasn't usually included in the "Home" collections of MS Office software. But I also appreciate that it's still available for separate purchase in a non-subscription model, That's an important thing for a software that handles personal data of yours.

There really isn't any actual competition for Microsoft Access, even after more than two decades of its existence. Generally, if you want to do anything close to what you can achieve with Access, there's no way around setting up your own database server and programming your own frontend from scratch, which is very much overkill for most personal and small professional projects. LibreOffice Base is seeing a lot of work to get closer to replicating Access, but it's still a long way from it, and has a multitude of annoying bugs that make working with it a hassle. It will need more time to mature. FileMaker is often cited as an alternative, and while it's true that it comes close to the core ideas, it's incredibly simplistic in comparison. Coming from Access, it feels like a toy, like moving from Photoshop to Instagram – it might look cleaner and you might still be able to do some similar operations with it, but there's no mistaking it for a professional tool.

have used it in the past and worked for me

Contrary to comments, there are NO, NONE, ZILCH alternatives to Microsoft ACCESS. I have tried every one of them, and none of them will Import an ACCESS DB.

Without the Import support, any alternative app is doomed.... my daughter has been using ACCESS for 15 years, and is not about to try and rewrite all of the databases that she has created.

I am trying to get her to move to Linux, and while it does not care what is behind the Black Box, unless it will run ACCESS, she refuses to mess with it.

Peppermint makes an attempt with their Cloud ACCESS, but it is so puny as to be ridiculous.

Access has been around for a long time, and was one of the first consumer-grade level relational database management systems for businesses to manage their product data / contact information / etc

In the end, MS-Access is really designed for small-mid sized business use, if you wanted that I highly suggest using

Airtable instead. Its getting outdated from newer user-friendly softwares for the small-mid sized business end, and in other applications a real database-management system should be used instead

To put it in perspective, it took me a few months just to learn MS-Access and a few days to learn an application like airtable

I can't agree with your list unless what you want to do is to play with a database as a simple toy. I'm a linux and open source user since more than 10 years and very critical with the politics of licensing of M$, but I use access after more than 20 years. I've been checked some of the applications you have in the list, and maybe the only one who can reach Access is FileMaker. Access is not only a tool for browse databases, but also is a great tool to develop applications, easier to use than VB.NET or similar. You may create good and complete applications with Access, and offer them to customers or users and have a nice experience for the user. It's useful, it's practical, it's easy, it's a tool which you can develop an application in few times. It's so good that sometimes it's difficult to believe that it's a Microsoft application. In fact, if you wish to develop with an alternative to Access, you have to use FileMaker. The best option of filemaker is that it allows to develop to Windows and for Mac

And I forgot, it's programming language, VBA has a nice leaning curve, and allows to the programmer to make very impressive and useful applications.

nuBuilder Forte might surprise you. Has a similar feature set to Access and is the 4 version of a product that was started in about 2005.

Core, Development & Services •  Database Apps And Websites For Anything •  Software for my Windows •  My Windows software