What is Manjaro Linux?

Manjaro is a user-friendly Linux distribution based on the independently developed Arch operating system. Within the Linux community, Arch itself is renowned for being an exceptionally fast, powerful, and lightweight distribution that provides access to the very latest cutting edge – and bleeding edge – software. However, Arch is also aimed at more experienced or technically-minded users. As such, it is generally considered to be beyond the reach of those who lack the technical expertise (or persistence) required to use it.

Developed in Austria, France, and Germany, Manjaro provides all the benefits of the Arch operating system combined with a focus on user-friendliness and accessibility. Available in both 32 and 64 bit versions, Manjaro is suitable for newcomers as well as experienced Linux users. For newcomers, a user-friendly installer is provided, and the system itself is designed to work fully ‘straight out of the box’ with features including:
- Pre-installed desktop environments
- Pre-installed graphical applications to easily install software and update your system, and
- Pre-installed codecs to play multimedia files

For more experienced – and adventurous – users Manjaro also offers the configurability and versatility to be shaped and moulded in every respect to suit personal taste and preference. Furthermore, a minimalist NET-Edition is also available in both 32 and 64 bit versions. Stripped of any pre-installed software, this provides a base installation on which to build your own system; starting from a command line, be completely free to chose your own greeters, desktops, hardware drivers, software applications, and so on!
Show full description ▾

AUR probably has the biggest selection of newest software today. The classic distro to use if you want to have access to this, is of course, Arch. But Arch is a pain to setup. Not so much to install - if you follow the install guide to the letter you can get Arch working pretty easily. The problem is what happens after. The guide will walk you through getting a basic GUI set up, for instance, but you might have all sorts of weird issues like flicker or mismatched fonts that will have you going down Google rabbit holes for days. A lot of things, like video drivers, break a lot and are hopelessly complex, troubleshooting that stuff is no fun at all. And at some point, you get sick of the mandatory crash course in obscure configuration, implementation details and bugs of every piece of software you have, and just want to have a working system and work on your own work, and not the system.

Manjaro lets you do that. The installer is helpful, and will actually set up an Arch system with a few bells and whistles at the level a reasonably advanced Arch user would. It doesn't do a perfect job, and there's probably Arch users out there that could install Arch better manually than the Manjaro installer. But as a novice user, as I said you can follow the wiki and get a working system. But if you want to customize it to your needs, the learning curve will be very steep and you will probably have to live with a system that is broken in a bunch of small ways for months or even years. With Manjaro you don't have to - it will certainly do a better job than a newbie following the wiki for the first time, no reading required. One could argue that a person uninterested in reading the Arch wiki shouldn't use Arch-based distros. Well... The other distros kind of suck, and the newbie distros (Mint, Ubuntu) are bloated messes. Manjaro is a pretty good compromise between not being a bloated mess and working out of the box. Your Manjaro install will probably have some problem or other (welcome to Linux, lol), and they might be problems you wouldn't have had in Arch. But in Arch you would have other problems (the ones that Manjaro solves), unless you know Linux quite well. If you knew Linux quite well, you wouldn't be reading a review about Manjaro to decide if you should use it, so I'll assume you don't, in which case, I absolutely recommend trying Manjaro! Maybe give Arch a shot first just to understand what the real deal is supposed to be like, play with it for a few days, get frustrated trying to fix everything. Then wipe that and install Manjaro - you'll get an instant feeling of relief.

There are two downsides with Manjaro and they have to do with the community and its origins in Arch. Manjaro is basically Arch with a fancy installer, some themes, a handful of additional packages (like a utility to switch kernels easily and a pacman GUI). There's very little difference and 99% of what you read on Arch wiki will apply, except that you'd only need to read it 10% as often because usually Manjaro just works to begin with. A few things will not apply, for example the kernels used by Manjaro are I think slightly different. Despite this, anytime you seek help all the Arch people will tell you to get lost because "Manjaro is not Arch". It is hard to objectively describe to someone who hasn't experienced it, but the Arch community is a bit abrasive to begin with, and they have a bizarre enmity to Manjaro users. Obviously if you were very knowledgeable, you would use Arch, not Manjaro, so all the experts are Arch users - but even though Manjaro is currently #2 on distrowatch vs. Arch on #16, Arch users constantly try to marginalize and exclude Manjaro users from any online help community. So something you will learn quickly is to lie about using Manjaro when asking for help. As I said, 99% of the time it won't matter, and the 1% you just have to learn (it's really not such an unpredictable thing as the anti-Manjaro Arch users will make it sound).

The other issue with Manjaro is that Arch is a rolling release OS. You get the latest version of every software, and the Arch position is that you're supposed to update everything on your system, even AUR packages (and you will have a lot of AUR packages because the repo has fuck all) every day, sometimes multiple times a day. This can take a lot of time and is a pain in the ass. A sensible person would recognize that, probably not much changed between puppyfartsoundboard v1.32.7.8cf and v1.32.7.8cg and there's no need to keep it on the bleeding edge - in fact, you only really want the security updates for a handful of critical systems. For everything else, the vast majority of updates will add little or no values for the user. Yet Arch requires you to spend time doing it over and over. You can't even update only important software because in Arch, partial upgrades are not supported. You can do them no problem - I have for years and it's fine, nothing breaks. In fact it will break less because occasionally Arch updates themselves will break. The Russian roulette at every update is part of The Arch Way, and every time you run pacman -Syu you basically have no idea if it will be fine or if you'll spend an hour figuring out how to even get your DE back up. So you are actually better off updating as little as possible, but if you do and something does break, good luck getting help. Without fail, a bunch of Arch users will show up (even though Manjaro Is Not Arch) and lecture you on how partial upgrades are bad, and then leave without solving your problem.

On the topic of packages, nice as AUR is it actually has a major security flaw. It's not a flaw of the system per se. But AUR packages are installed by running scripts which can do very bad things to your system. This was obviously first set up for Arch and the expectation from an Arch user is to read and audit every script. Sometimes these scripts will download and run other scripts. Most will be written in bash (yuk!). You will typically get 50-1000 lines. They will not be the tidiest code ever. So here's what will happen in practice: Unless you know bash very well, it will take an hour or more to read all that code, not to mention looking up syntax you don't know or actually verifying if it does what you think it does for less obvious lines. You will not do this every time you need to install something from AUR. You will train yourself to blindly trust hundreds of scripts from strangers on the internet. If these scripts have malware, oops! So you can take this in two ways: Either installing every AUR package (don't forget dependencies!) takes hours because you need to closely check the install script, or it is horrendously unsafe because you're not just blindly accepting everything. I would guess 90% of Arch users are the latter, but, pick your poison.

So if you can put up with these proiblems, Manjaro is actually a great system. There is an additional flaw in that it uses systemd, but there are precious few realistic alternatives that don't. Other than these, it basically has no issues. Probably one of the best daily driver desktop distros (hell, OSes) available right now.


I wanna thank Arch linux and Manjaro contributors for everything from base to wiki and forums.

Manjaro is Arch Linux for lazy people, no thank you! I will stick to original Arch Linux.

It's great not having to worry about installing proprietary drivers.

I can not comment on everyday use, however the first impression is really good as absolutely everything works out of the box on my machine and the look and feel is really polished and functional. For developers and to get work done it is a fantastic distribution as you can get the latest version of almost every open-source and free software from the AUR repository. To give you an idea how insane it is, from the AUR repository, you can install the latest stable version of Unreal Engine and the latest beta version of many other tools, even otherwise paid software if the source is available like Aseprite for example. If you are using open-source, free software for work and development or just would like to experiment with the latest tech, Manjaro is my no1 recommendation.

I am in Love.
Linux, in its truest sense means Freedom.
I have been using Manjaro for quite a while and now I have decided that Windows 10 won't do anymore. I won't be going back to that limited and constrained experience. I have found so many new things that I never knew possible for my 5-year old PC. What is paid in Windows is available for free here in Linux. I can modify, install and play around to my heart's content while supporting the devs that truly made a difference in my life. The sheer amount of possibilities with an Arch-based distro like this is, simply amazing!
Great UI, snappy, easy installation, heavy customization ready, massive collection of scripts, and the list goes on...
Official repo, AUR, Snap and Flatpack has everything you need. Although it comes with a high risk as you choose anything beyond the Official repo, but as they say- "Nothing explored, nothing gained."
I have tried Ubuntu, Fedora and Mint before but they don't compare to what Manjaro has to offer. Yes, the new Ubuntu looks nice and there are many other options to consider but, they are not for me. I wanted a simple yet powerful OS, and the search has ended.
Thanks Manjaro team for this great distro. 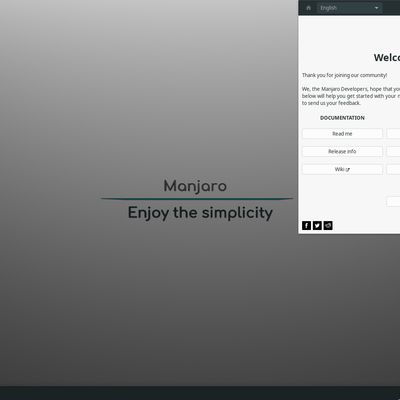 Our users have written 24 comments and reviews about Manjaro Linux, and it has gotten 290 likes

View all
Manjaro Linux was added to AlternativeTo by Tanath on Dec 4, 2012 and this page was last updated Jan 24, 2022. Manjaro Linux is sometimes referred to as Manjaro.