KRDC is the KDE Remote Desktop Client. KRDC was overhauled as part of the Google Summer of Code (SoC) 2007 by Urs Wolfer and other developers to be included in the KDE 4.0. An overhaul was needed as KRDC development had slowed to a stop as it had no active maintainer for several years. Both Virtual Network Computing (VNC) and Remote Desktop Protocol (RDP) are supported, so Unix-like and Windows PC can be accessed using this software. As part of the SoC project developers helped make Libvncserver compile on Windows, allowing for a port. 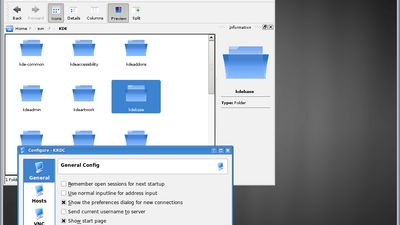 Our users have written 0 comments and reviews about KRDC, and it has gotten 17 likes

KRDC was added to AlternativeTo by skafoelix on and this page was last updated .