What is Disk Utility?

Disk Utility is the name of a utility created by Apple for performing disk-related tasks in Mac OS X. These tasks include:

the creation, conversion, compression and encryption of disk images from a wide range of formats read by Disk Utility to .dmg or, for CD/DVD images, .cdr;
mounting, unmounting, and ejecting disks (including both hard disks, removable media and disk images);
enabling or disabling journaling;
verifying a disk's integrity, and repairing it if the disk is damaged (this will work for both Mac compatible format partitions, and FAT32 partitions with Microsoft Windows installed);
verifying and repairing permissions;
disk erasing, formatting, partitioning and cloning;
secure deletion of free space or disk using a "zero out" data, a 7-pass DOD 5220-22 M standard, or a 35-pass Gutmann algorithm
adding or changing partition table between Apple Partition Table, GUID Partition Table, and master boot record (MBR);
creating, destroying, merging, and repairing RAID sets;
restoring volumes from Apple Software Restore (ASR) images;
burning disk images to CD or DVD in HFS+ format;
erasing CD-RWs and DVD-RWs;
checking the S.M.A.R.T status of a hard disk.

With the release of Mac OS X 10.11 ("El Capitan"), Apple redesigned the trusty Disk Utility to make it bright and colorful and, in the sad tradition of Apple's "simplification" of iWork, iPhoto and other apps, much less useful.

It has lost the ability to verify or repair file permissions. It can no longer resize disk partitions. There's nothing in the app at all about RAIDs. Apparently, some or all of these feature roll-backs are described as coming features, but that will be too late for people who want to do those things now.

Some enterprising folks have realized that if you can obtain a copy of your old Disk Utility and are not afraid of using the console and doing a bit of hex editing on the old copy, you can run the pre-nerfed version under 10.11.

Disclaimer: running an old version of a tool as powerful as Disk Utility against a newer version of the operating system is not recommended or supported. By following the instructions in the article, you are definitely "coloring outside the lines." You have been warned.

Said about Disk Utility as an alternative

Danilo_Venom Disk Utility, among the other functions, can create a clone of your drive too
Positive comment • over 5 years ago • as an alternative to 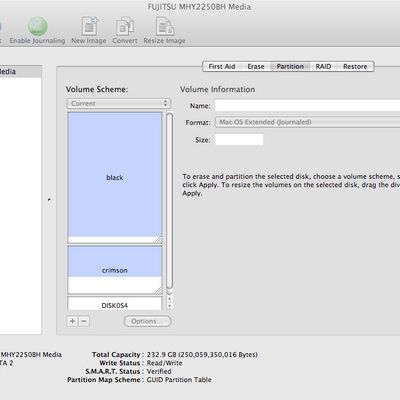 Our users have written 1 comments and reviews about Disk Utility, and it has gotten 42 likes