What is Aptana Studio?

Aptana Studio is a complete web development environment that combines powerful authoring tools with a collection of online hosting and collaboration services that help you and your team do more. Includes support for PHP, CSS, FTP, and more...
Show full description ▾

Great for automatically uploading and syncing PHP sites. Does exactly what I wanted.
Takes a couple of hours to get used to but haven't come across a single problem.
Seems very powerful, yet simple if you don't need the advanced features.

I installed and tried to use Aptana Studio 3 as my main IDE for the better part of a day. Really, I did... But at the end of the day I gave up in frustration and uninstalled it. Here are my impressions from trying to use it:

I can live with the second and third points, but the last one was a deal breaker for me: no matter what I tried -- and I tried pretty much all the Stack Overflow suggestions -- I was not able to clone from a Git repository out of the box. If you do a search for "aptana git remote hung up" or "aptana cannot clone git" you will see that I'm not the only person having Git issues. I have both GitHub for Windows and Git for Windows installed, and both worked fine in the past, so it seems to me that the Git component installed with Aptana Studio is just poorly implemented. One Stack Overflow solution mentioned that the built-in Git integration doesn't work and you have to install EGit (an Eclipse plugin), but by this time I had already given up on Aptana Studio as a viable general purpose IDE.

You see, a developer spends most of their time coding, so an IDE has to fit them like a tailored glove. The developer has to feel as comfortable around an IDE as their best friend. Since Aptana Studio was starting to consume my day, and not in a good way, I finally came to the conclusion that a piece of software is not supposed to make the end user struggle this much. It just didn't feel right (the opposite of "love at first sight"), so my search for an IDE continues...

IMHO, Aptana is better than PDT in Eclipse however if we compare free and cross-platform solutions than Netbeans is much more powerful.

Anyway, if commercial software is not a stop-blocker than I would strongly recommend phpStorm. I just love this one.

They turned their back on the PHP community, Apatana basically went down the toilet when that happened.

Not great for HTML/JS/CSS -- I prefer IDEs that focus on particular languages.

why Aptana larger than adobe Dreamweaver ?

can developer make it smaller and more power !!!

Starting Rails development has been a real hassle, since i have to do a clean install of RubyGems again and then install Mongrel to get the damn thing going. Hopefully they'll start to think about better packaging of the features and upgrades. 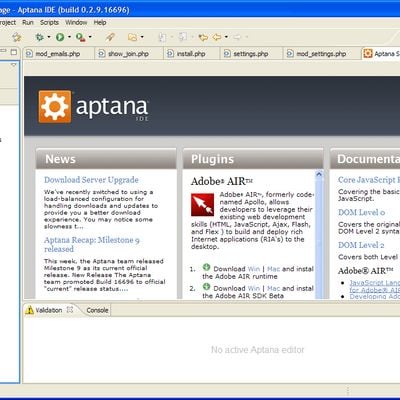 Our users have written 12 comments and reviews about Aptana Studio, and it has gotten 331 likes

View all
Aptana Studio was added to AlternativeTo by Ola on Apr 8, 2009 and this page was last updated Feb 13, 2020. Aptana Studio is sometimes referred to as Aptana.