When we [Microsoft] build Visual Studio Code, we do exactly this. We clone the vscode repository, we lay down a customized product.json that has Microsoft specific functionality (telemetry, gallery, logo, etc.), and then produce a build that we release under our license.

When you clone and build from the vscode repo, none of these endpoints are configured in the default product.json. Therefore, you generate a "clean" build, without the Microsoft customizations, which is by default licensed under the MIT license This repo exists so that you don't have to download+build from source. The build scripts in this repo clone Microsoft's vscode repo, run the build commands, and upload the resulting binaries to GitHub releases. These binaries are licensed under the MIT license. Telemetry is enabled by a build flag which we do not pass. 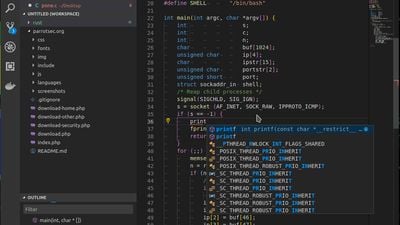 Our users have written 13 comments and reviews about VSCodium, and it has gotten 189 likes

VSCodium was added to AlternativeTo by POX on and this page was last updated .

It's Visual Studio Code, but even more FOSSy! It also features some other slight differences:

It was a fair review, not a blind one, except you forgot to mention that VSCodium has broken the extensions marketplace part. That's all I care about in Visual Studio Code. I personally don't care about being "more FOSSy". What does that even mean in practice?

However, the main philosophy behind the existence of VSCodium is to propagate the malicious belief that Visual Studio Code's telemetry toggle switch is broken. This is a big red line for me. My philosophy is "do no evil."

Only Microsoft products can use and connect to Microsoft’s Extension Marketplace. The terms of use for the Marketplace prevent any non-Visual Studio products from accessing it. So VSCodium can't legally access the marketplace, it's a proprietary feature! In the long run it's better to work on establishing an independent and free marketplace for VS Code extensions like https://open-vsx.org/

They seem to update to catch pretty fast.

as close to VS Code as you can get sans Microsoft. It is a piece of genius, and if I were not so familiar and locked by habit into VS Code (which is more regularly already on a machine when you arrive at a terminal/thin client) then I would have switched to this, but that is the only reason for holding out.

A must have if you are vcode addicted

To those complaining about the limited functionality, know that VSCodium has its own FOSS alternative to the VSCode marketplace. It does this to comply with licensing. If you want to want to use VSCodium with the VSCode marketplace, try this script https://github.com/computercam/_unixconf_dotfiles/blob/master/scripts/fixvscode.sh

The user experience is not as good as in Visual Studio Code. At first sight it looks the same but there are a lot of small features which do not work as well or do not work at all like the git extension, the chrome debugging, the remote debugging, the plugin suggestion and others. I'm sure VSCodium developers do their best but they are still dependent of Microsoft so they will always be behind. A better alternative would be to directly use Visual Studio Code and manually disable telemetry or use something totally independent like Atom.