What is SoftEther VPN?

SoftEther VPN ("SoftEther" means "Software Ethernet") is one of the world's most powerful and easy-to-use multi-protocol VPN software. It runs on Windows, Linux, Mac, FreeBSD and Solaris.

The source-code of SoftEther VPN is available under GPL license in mid 2013. 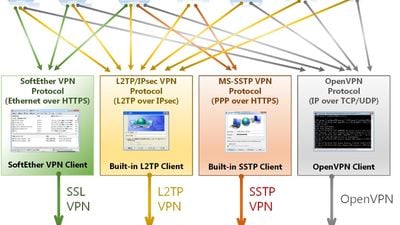 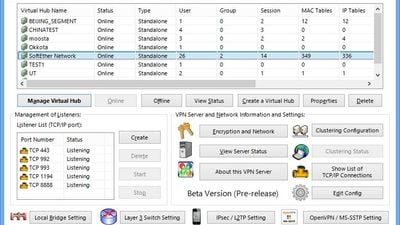 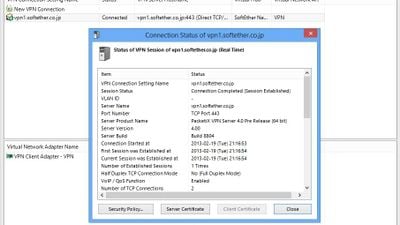 Our users have written 7 comments and reviews about SoftEther VPN, and it has gotten 108 likes

SoftEther VPN was added to AlternativeTo by mll on and this page was last updated . SoftEther VPN is sometimes referred to as SoftEther, Software Ethernet.

The cool thing is that i can setup a VPN Server at home on my PC very easy and then connect from anywhere in the world (e.g. using my iPhone) This way i can use my home internet from anywhere and have a secure way to reomte to my home pc. Also this helps in preventing damage by using free WLANs since i only use them to tunnel to my home pc.

It's simply a wonderful piece of software, few steps and you have all setup a multi protocol VPN service.

Circuit VPN Server for Windows gives an advantageous and basic path for making quick and secure VPN in an organization just as for individual use. This product makes it simple to supplant costly or obsolete arrangements and fabricate your agreeable organization with stable access from any spot.

Excellent choice for a solid powerful VPN with lots of flexibility

Free VPN for my little network. Easy to understand deploy and customize.

I'm totally amazed about this piece of software. Since I'm not a networking expert, it took me a while to understand how it works, and once you get it, when more you play with it, you more like. So damn easy and fast to implement !

This software alows you to configure any kind of VPN (OpenVPN included) under any platform (Windows, Unix, MacOS) with any kind of configuration with the easiest way,

Of course you should know what you do, but it's extremelly easy to setup a home or clustered / failover VPN in minutes using any server or computer you have available.