EPIC WIN for powerful computers:
This software fully utilizes every core in my i9 CPU. Thanks for making file analysis efficient by using all of my computer's potential, not just a core or two. Too many programs don't take advantage of the cores you give them. Excellent software for power users!

I tried ALL of the programms listed below, some returned no results, some up to 40, however only Similarity was able to find my !500! duplicates in my pretty large libary. It costs some money, but it is definitely worth it.

Comparing to any other duplicate audio detection solution, Similarity (v1.9.1) does it the best. Even the free version still beats the rest. This is a professional tool and unlike the rest, not a joke and if you really deal with a lot of audio files, you will want Similarity.

Although, the engine works well, the User Interface is still crappy currently, seems to be missing a lot. Luckily, the developer will accept user requests in Similarity's forum. It's a rather new project, so give it time to get things done.

There is no lifetime license. The updates come once per half a year, mainly user requests. Since there is a lot to improve, this seems to be intentional, a business strategy, to keep the money flowing, slowly and steadily and most definitely not going to give it all out immediately.
Similarity's PayPro Global is rather stupid - they take your money and then after 48h they ask, if I allow this transaction, ask some more stupid questions and only then you get your license. Luckily you can use PayPal there too now.

I did a little test, well okay, it took whole night. I had 1400 songs to process. I tried many audio duplicate finding tools I could find with Google and here's what I finally came up with:

###Nr. 2: Audio Comparer
Old program, dead support, nobody seems to care to make it better.
It took some time to process 1400 songs, but not too much.
The program occasionally crashed, since I had some FLACs and a WAV file within my MP3s, had to convert all to MP3.
The duplicate results were decent and no wrong songs were reported, but that's due to that those songs were simple to process. If those songs were d'n'b, then it'd had serious problems with false songs. It also has an option in right-click context menu to mark the wrong song as "this is another song!", but I could find the option to unignore that item again.
The program has built-in player, which could use some tuning, but it's nice that it continues to play the next song from the same position as it was.
The results list is annoying - collapsed treeview, always have to expand all manually, with expand all function. It should be like in Duplicate Cleaner - no stupid collapsed treeview, only different background color for each group. You can use mouse scroll to play the next or previous song.
The autoselecter isn't that wrong at all, only 90% were wrongly checked.
Some songs reoccurred in several duplicate groups. Guess the program couldn't tell that they still were the same songs and should be in one group. If you check one song from one group, then it doesn't get checked in the other group(s) where it is also in, so have to be careful with that.

By the end of using this tool, I still had 5 duplicate songs of one song and 13 duplicates of one other song. I think I got rid of 50 duplicate songs.
Otherwise, it's a safe program to use, with rather low findings result.

###Nr. 1: Similarity
I used the freeware version.
New program so don't know, how much attention they turn on suggestions by users.
It took 2x less time to process 1400 songs and it found A LOT.
The findings were okay, until you met the bottom of the list, where were absolutely different songs, but there were only 9 false, so it's okay. I didn't see any "mark as wrong song" option tho.
The program has no built-in player, so you have to use your own, which is annoying, since even on my PC, the playback of that song may either start with a delay or not start at all, so you might mark the wrong file.
The results list is even more annoying - treeview, have to expand each manually and there isn't even expand all option anywhere! Since there is no built-in player, you can't use mouse scroll to play them.
In free version, there is no automarking function, no checkboxes in front, you have to mark them manually with spacebar. Seriously, take a look, how Duplicate Cleaner works and use its list design!
In the middle of the list, I started to notice that many songs reoccur in up to 4 different groups, but luckily, check one and program automatically checks all other entities, where ever they might be in the list.

This program also has a duplicate image finder, which doesn't seem to work at all - the results, it's all terribly wrong.

By the end of using this program, I still have 6 duplicates of one song and no duplicates of that other song, which had 5 duplicates previously. I got rid of over 300 duplicates with this tool.
Freeware version seems to do sufficient job. The program seems to be cheap enough, so I think I might buy the full version in hope that it can "see" the remaining 6 duplicates too.
I recommend this tool. I hope they won't turn their back on user suggestions, so this could become the first and probably the only ultimate tool in the world for finding duplicate audio files.

The only freeware which compares the audio itself to find duplicate audio files. It's not perfect and it can take a long time to scan a large collection, but for free it works great.

Reply written about 8 years ago

It is limited in number of results, but it works 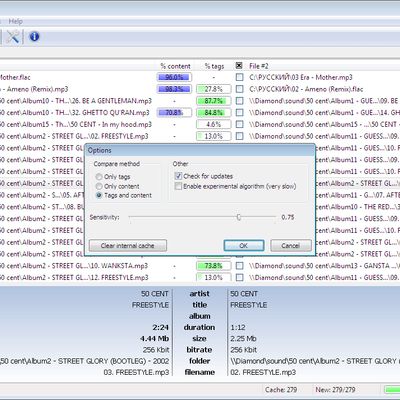 Our users have written 6 comments and reviews about Similarity, and it has gotten 35 likes

View all
Similarity was added to AlternativeTo by Journeyman on Jul 10, 2009 and this page was last updated Jan 16, 2022.