TestDisk , is file data recovery software designed to recover lost files including video, documents and archives from Hard Disks and CDRom and lost pictures (thus, its Photo Recovery name) from digital camera memory. PhotoRec ignores the filesystem and goes after the underlying data, so it will still work even if your medias filesystem has been severely damaged or re-formatted.

Someone deleted photos from my SD card without my knowing it, which annoyed me to no end, but I had to calm down and just focus on trying to get them back.

First thing I did was to lock the SD card so that nothing else could be written onto it. Then I got an external hard drive to act as the recipient of the recovered files, and plugged it in. Then I started googling for software to try. I heard that Exif Untrasher does miracles, but that's a Mac OS X-only product, and I don't have a Mac. I wasted time downloading Wondershare Data Recovery, Easeus Data Recovery Wizard, and Recuva. Recuva saw the photos but claimed that they were irretrievable. Wondershare saw the photos but then said that they would only be able to retrieve 100 MBs of files and that I would need to purchase an upgrade to grab all of them. Easeus trundled through the disk, said that it retrieved the photos, but when I tried to look at them in Microsoft Paint, in Google Picasa, or even in Microsoft Windows preview, it said that each of the photos was an "Invalid Image". Ain't nobody got time for all that!

Other than Exif Untrasher, the two softwares that had the best reviews, work on Windows, and were free, were FreeUndelete, and PhotoRec, so I downloaded both of them. FreeUndelete didn't find any of the deleted images. I let PhotoRec run through the card, in "whole disk" mode, and took a nap. Two hours later, I woke up, and I had two new folders on my external hard drive (recupdir.1 and recupdir.2). Together, they contained pretty much every single photo or video that had ever been deleted from the SD card in the past month including the recently-deleted photos! Hurray!!!

Another broken disk, this time a USB drive that suddenly decided to mess up its own partition table and file system, and another bout of going around desperately trying each and every possible data recovery software. I used TestDisk – also by Christophe Grenier – to first of all reconstruct a boot sector, without which any of the other recovery tools wouldn't even want to work with the drive. The best thing: I more or less accidentally ran Microsoft's CHKDSK on the drive afterwards. Never do this! It truncated all cluster chains to 1. I could see my file and folder structure in Windows Explorer again, but only the files up to 16 kB in size were intact. All the others were cut off at 16 kB. Whether recovery would have been easier or more successful before CHKDISK mucked all of that up, I don't know. But it's a horrible tool that doesn't even give you the option to restore recovered chains to a different drive than the one they're being recovered from – worst disk tool programmers ever?

I have tried around a dozen data recovery tools once more, with very varying degrees of success. The commercial ones were the worst. With the exception of OnTrack's EasyRecovery, which matched Recuva in success rate but in turn is mad expensive. FreeUndelete, with which I had a lot of success last time, failed to generate any scan results this time. I wasn't able to figure out why. Recuva did a respectable job, but only managed to recover around 10% of the files. PC Inspector File Recovery's functionality was limited to crashing upon start.

That's when I decided to give PhotoRec, which came with the TestDisk download, a go. Initially probably averted because I thought it would do searches based only on signatures for picture files, which is not the case. As the other commenter pointed out, it runs in a console window which might scare off some less tech-savvy users. There's really no reason for that, though. It is menu-driven, follows a simple step-by-step wizard process, and gives you all the necessary instructions and information along the way. Really, the only difference to a GUI-based tool is that you select buttons using the arrow keys instead of a mouse.

There is no selective recover (I think). What you do is select a drive to recover from, set a target directory for the recovered files, and let PhotoRec do its job. It will store recovered files in subfolders in batches of about 500. You let it run, and then you open up these folders to see what's been recovered.

To make the story short: as far as I can tell, PhotoRec recovered almost every file from my messed-up drive. It took an hour for a 32GB Super-Speed USB drive. Unfortunately, most of the files didn't get reunited with their original filename, just a sequential number – although crucially, the file type is correct. It also recovered a lot of files already deleted before the crash, so the final version of some text document is thrown on a pile with numerous previous revisions that had actually been replaced earlier, so it'll take a while to sort everything out. But what matters is that it would seem my stuff is back. Christophe Grenier is my hero!

What PhotoRec does or how it achieved this, I don't know. File systems aren't my area of expertise. But it must do something radically different than all the other recovery tools I tried. All of which came highly recommended, and no doubt do a great job in other scenarios, but none of them offered me to recover more than around 5-10% of my files. For my particular damage scenario — the cluster chain for every single file on the drive being cut short in both FATs — PhotoRec recovered at least 99%, maybe 100% of my files intact. If you're in a situation where you're looking at tools like this, I don't think I need to tell you any more to have you give this one a spin.

found only 'most recently deleted'

Don't let the DOS-like user interface fool you. This is the BEST software to recover photos from SDCard. You just select the SD Card, select a directory to place the recovered files, and BOOM, everything will be there. Can't be better than that. And it's totally free!

I used PhotoRec on my GNU/Linux PC (Xubuntu 20.10) to undelete deleted photos on an SD card in my camera. It worked phatastically and took not too much time. Great software, I immediately donated a few bucks.

You can define a directory where to store the recovered files, and everything that the software finds will be stored there, so make sure to have enough free space on the external drive or whatever. The file names are auto-generated by the programme.

A graphical user interface would be nice of course, but on the other hand, the console program does what it should and is easy to understand.

I tried to use DiskGenius and it wanted me to pay for the full version to get my files back. PhotoRec saved the day, and was able to get all of my files back for free. It does not have a graphical user interface, but it still works. This is good software. 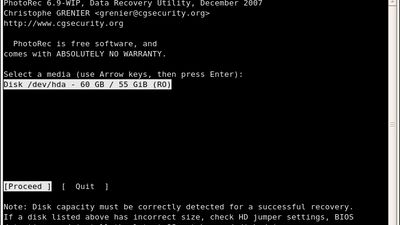 Our users have written 11 comments and reviews about PhotoRec, and it has gotten 159 likes

View all
PhotoRec was added to AlternativeTo by zteff on and this page was last updated .