OpenSCAD is a software for creating solid 3D CAD objects. It is free software and available for Linux/UNIX, MS Windows and MacOS.

Unlike most free software for creating 3D models (such as the famous application Blender) it does not focus on the artistic aspects of 3D modelling but instead on the CAD aspects. Thus it might be the application you are looking for when you are planning to create 3D models of machine parts but pretty sure is not what you are looking for when you are more interested in creating computer-animated movies.

OpenSCAD is not an interactive modeller. Instead it is something like a 3D-compiler that reads in a script file that describes the object and renders the 3D model from this script file. This gives you (the designer) full control over the modelling process and enables you to easily change any step in the modelling process or make designes that are defined by configurable parameters.

OpenSCAD provides two main modelling techniques: First there is constructive solid geometry (aka CSG) and second there is extrusion of 2D outlines. As data exchange format for this 2D outlines Autocad DXF files are used. In addition to 2D paths for extrusion it is also possible to read design parametes from DXF files. Besides DXF files OpenSCAD can read and create 3D models in the STL and OFF file formats. 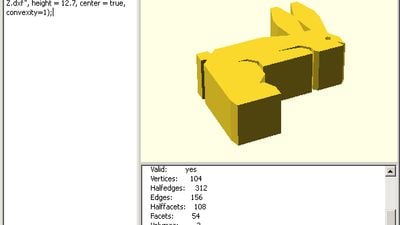 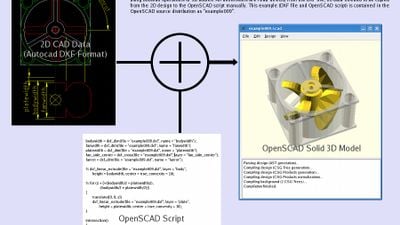 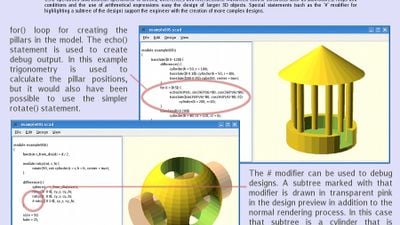 Our users have written 1 comments and reviews about OpenSCAD, and it has gotten 69 likes

OpenSCAD was added to AlternativeTo by innovator116 on and this page was last updated .

Openscad enables you to construct 3D objects by building up from cubes, prisms, spheres, cones etc. You specify dimensions in a script which I find easier because I dont have to learn a viewing and editing interface.
Also making accurate drawings does not require manual dexterity.

There is a rendering interface so that you can see your object in 3D. This is a little limited but quite workable. My main problem is losing the object by zooming out too far or having it offscreen and it is a bit hard to get it visible again.

Output and printing is limit. You can output in STL, which I have imported into Blender OK. You can project onto a plane which you can output as DXF. This does not seem to load into InkScape unfortunately. Someone said it loads into Openoffice draw. The DXF file opens into Qcad OK. This is how I have printed so far but you have the Qcad text written over your file on the demo version.

I am making a plan of my house. I have found this the most successful solution yet because I can add a room or 2 at night by just adding to the script and I can add comments.

One niggle - (I think it is limitation of the constcructive geometry system used) is that you cant get the program to to give you measurements off a constructed object. You are reduced to working out coordincates which can be tricky after you have done a lot of transforms.

Said about OpenSCAD as an alternative

Assurance of code based parameters