mplayer2 is an advanced general-purpose video player. A fork of the original

MPlayer project, it contains significant further development and supports a number of features not available in other players.

Improvements over MPlayer
- Better pause handling
- In MPlayer executing any commands forced the player to unpause. This is no longer the case; in MPlayer2 you can change settings, seek, or run other commands while paused.
- Better Matroska support
- Easy to use multithreading support
- Much better support for VDPAU functionality on NVIDIA cards
- Support for precise seeks
- It's now possible to seek to any frame in the video; seeks are no longer necessarily limited to keyframes.
- Support for gettext-based translations

MPV is an updated fork of mplayer2 and

The project was abandoned and last activities date back to October 2013.

I had a lots of problems with players that use directshow codes that break and crash on many occasions.
I started using this player as the alternative to it's predecessor Mplayer, because of some features that it was missing for mkv files, and simply it was the solution to all my problems.
There is no fear if you don't like to deal with a command line player, just get any interface program like smplayer, in combine with this interface you get the best and most compatible player to play any file you have.

Hey I use mplayer2 on windows (look around for a recent build), with just the keyboard interface. I found it's definitely the BEST program if your hardware isn't the latest and greatest, runs on the smell of an oily rag, and everything is configurable. I have playback issues with Media Player Classic or VLC that I never have with mplayer2.

With just the barebones version, you need to memorize a few keys, e.g. "F" to toggle full screen mode, and "O" to toggle OSD (time display) but it's SO responsive and efficient once you know the keys needed.

Because I have limited hardware and I want the best playback for all my media, I found it's handy to create a file mp.bat containing this text (change the path to where you put mplayer) which runs the app in High priority:

Use the batch file as the default program for opening the videos.

To get really smooth playback on older machines, I played around with options, and came up with the following; mod your "config" file in the mplayer directory. Add these lines: 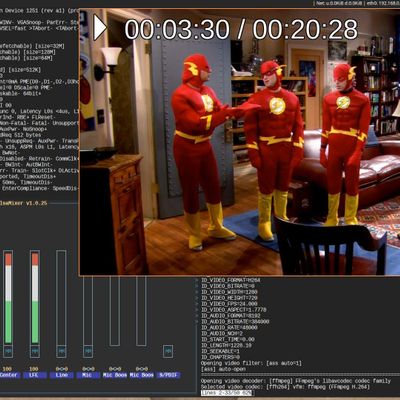 Our users have written 1 comments and reviews about mplayer2, and it has gotten 25 likes