What is Microsoft Works?

Microsoft Works was a basic office suite that is smaller, cheaper, and has fewer features than the

Microsoft Office Suite. Its core functionality included a word processor, a spreadsheet and a database management system. Latest versions had a calendar application and a dictionary while older releases included a terminal emulator.

Works was bundled with many computers for free.

Microsoft Works had built-in compatibility for the Microsoft Office document formats (DOC and XLS), including, but not limited to, the ability of the Works Word Processor to open 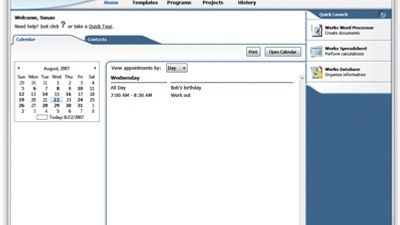 Our users have written 2 comments and reviews about Microsoft Works, and it has gotten 6 likes

He he he. No one like Works, I used to use it back in primary school (the late 90's), but it is now surpassed by even low-grade free software, because its when practically unchanged since then. Not to mention the availability of OpenOffice.org which is an excellent suite.

Works... works. It's not a particularly good office suite, but it's pretty much free, despite its "commercial" label. Almost every computer comes bundled with it, so it's like a free (crappy) version of Microsoft Office.