[The free version can be found at https://web.archive.org/web/20150919075327/https://www.onlinestoragesolution.com/ and does not provide all the features described here.]

Mankayia works by creating a FreeBSD VPS with unlimited storage and installing very useful software such as ownCloud, Transmission, Plex, Pydio, and a web SSH client, which users can access via a easy to use control panel. They give you root access to the server, meaning that more advanced users can install software of your own as well (limited by CPU speed and memory use).
The provided software gives plenty of functionality, such as downloading torrents, backing up or storing files, (S)FTP, Rsync, SSH, Webdav, simple file sharing, and media streaming.
One user has said that Mankayia is like owning a mini Dropbox, Box, and Netflix in one package.

Every server is encrypted so that no one else can access your files or even see what is on your server. All default software is set up to run over SSL so that it is difficult for any middle man to see any data being sent or recieved.
Show full description ▾

The service has been discontinued and the official website is no longer accessible.

This is a great service. Be careful with the root privilages, though, because support can be a bit slow if you screw things up. That's the only problem I've had, though. The server is fast, the connection is fast, and I haven't really needed anything that wasn't already installed.

Thanks for the tip this is the best thing since sliced bread. It's the fastest cloud storage I have ever used and the tools are great. I contacted support about setting stuff up and it did take them about 1/2 hour to get back with me last night. A little slow but I can work with it.

I originally loved this service when it was Online Storage Solutions. After it became Mankayia, the support dropped off all while they were trying to move everyone to a new platform. I think in retrospect they didn't want to move anyone. Rather they wanted to leave the old customers to waste and start over. So in effect I have lost access to my old data and am supposed to be OK with that and setting up a new account. VERY BAD!!!

Email support has dropped to zero, and the phone line is always busy, if it works at all. No one ever gets back to you. DO NOT SIGN UP FOR THIS SERVICE EVEN IF IT LOOKS GOOD ON THE FRONT END!!!!

The Error (for the old site) I am getting is home directory not found. My new site does not work any more either but nothing was ever there anyway.

After reading the negative reviews about the company changing it's name and more less dumping its customers, it is difficult for me to buy into their agreement, however inexpensive it may be. It is probably the best thing out there in terms of price and storage($10 one time fee, for unlimited storage), but if everything is lost or if it gets hung up for months waiting for customer service to retrieve my files, then it's not so good. I guess the question should be, is there any customer feedback since the change over? Have they did anything to ensure safety?

I tried to log in to my online storage solution account after several months and my password is not working anymore. I have not received any response to three emails I have sent to support@OnlineStorageSolutions.com and support@Mankayia.com in last nine days, asking for a new password, or a reset link sent to my registered email address. I am very worried that I will never see my stored files again.

Warning against signing up and subscribe to Mankayia.com previously known as Onlinestoragesolution.com. They have a nice polished look from the outside promising you a lot of features for low cost but behind all that there is nothing to support it and I mean nothing. Mankayia is a total waist of your money.

My experience/review is as follows:

I signed up with Onlinestoragesolution.com (now Mankayia.com) perhaps blinded be the many features for a low cost. They promised unlimited storage and backup, rsync and many other features.

I got the access and everything functioned for a while but after a month or so I suddenly could not backup my files anymore. I had exceeded the storage limit! I was in dialog with support many times where they kept telling me that they would solve it shortly. It was solved after a month. All my files were gone and I had to start backing up all over again. I was then persuaded into upgrading platform to the new version 9. which I was told was much faster and nearly flawless. I paid again and everything worked for a while.

On day Onlinestoragesolution.com had suddenly become Mankayia.com without any notice to the users and my account had stopped working again. The OwnCloud software was deleted from the server! I contacted the support link to Mankayia.com and it was the same story again. No usable support at all. I was told they would solve it very soon and it is while writing this over a month ago. They do not answer the e-mails every time and when they do, it is totally useless answers. For instance I was told that if I couldn’t wait and I could install the OwnCloud software again by myself! Like I know a lot about Ubuntu and OwnCloud. Typically Mankayia.com/Onlinestoragesolution.com support. Again I was told to upgrade for a higher cost to the new Mankayia system which was much better then the old system but enough is enough.

My files are gone, my money are gone and I spent a lot of my time on nothing. For that reason I will warn YOU from signing up with Mankayia.com. It is the same scam as onlinestoragesolution.com and they will rip your money. 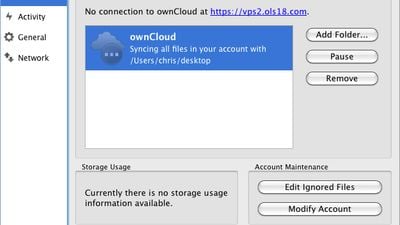 Our users have written 5 comments and reviews about Mankayia, and it has gotten 3 likes

View all
Mankayia was added to AlternativeTo by adenthedragon on Jun 3, 2014 and this page was last updated Nov 11, 2021.