What is Macgo Blu-ray Player?

Macgo Blu-ray Player is a superior Blu-ray player that can bring you the most unforgettable Blu-ray experience on your Mac or Windows computer. Macgo Blu-ray Player can satisfy just about every need you could possibly have in a Blu-ray Player. It features a friendly user interface, ultrafast loading and super high quality. Besides that, it perfectly supports Blu-ray, DVD and any other media format that you want to play. It outputs video at up to 1080p high-definition quality without loss of data and frame, and allows full preservation of all audio tracks (like DTS 5.1, Dolby TrueHD Audio, etc.). Macgo Blu-ray Player is really easy to operate. You can control almost everything on the main interface with your mouse. More settings can be done by right-click on the interface while playing. Or you can change preferences in the menu on the top of the interface. Macgo Blu-ray Player can support any media format that you can possibly think of, video, audio, even photos. Also, this brilliant Blu-ray player now supports Blu-ray menu and DVD menu, which make it really convenient to play movies and choose settings. Another amazing function of Macgo Blu-ray Player is the AirX function. With its help, Blu-ray can be played on iOS devices. Such as iPhone, iPad and iPod Touch. Using the distinctive "Share" function of this versatile Blu-ray player, you can directly recommend the movie you're watching to all of your friends on FaceBook or Twitter anywhere and anytime.

What is new in version 2.16.10? 1.Fixed the problem of auto play failure when inserting a disc under 10.11. 2.Fixed the BD+ problem of some newly released discs. 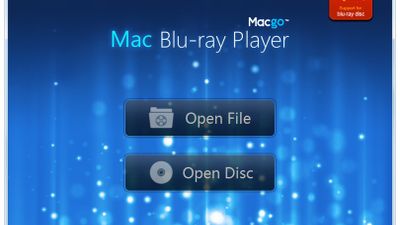 Our users have written 8 comments and reviews about Macgo Blu-ray Player, and it has gotten 14 likes

This is really the only Blu Ray player that works absolutely very well under Linux using the Windows version under Wine.

The first time I open it on my Mac and browse all its features, I found that the integral style matches up so good with my Mac machine. Then easy operation leads me to throw all my Blu-ray discs to it. most of them works well.

Friend Recommended me, I used the trial version, works well for Windows 8.1. I decide to pay for it, for I can not bear watermark anymore with such a good player.

Apple does not make an Apple-branded BluRay player, so I have to buy this. It will plug and play, just fine. Apple's DVD Player software does not work with BluRay, so I install third party app Macgo Blu-ray Player. All works fine folks.

I won't say it's the best or perfect, while it meets my needs for Win 7 currently. I got Macgo Blu-ray player when I found VLC sometimes failed me when dealing with some Blu-ray issue.

About this bluray player for mac, i like these points the most: 1, Completely Blu-ray playback, bluray movies, bluray disc, bluray iso files, bluray movies and discs are important enough in my life. 2, Frequent discount activities, i have been observing this bluray software for a long time, about its upgrading, its improvement, its official website and its users' review. I'm sure frequent discount avtivities is the most cheering thing for our mac and bluray users. 3, HD enjoyment is supportive, the combination of HD display and Blu-ray enjoyment is impeccable in the bluray video market, i can't resist this kind of visual and hearing enjoyment, i'm sure you will not, either.