From what I can see’ Liberkey is still active/still being maintained, additional/updated apps being added, etc.
I use Liberkey, Portableapps and Symenu. Still undecided as to which is the best.

I've been a casual PortableApps.com user (i.e., not a "junkie") for a couple of years. After reading about LiberKey, I got curious and spent about two hours trying to use it as I would PAP. Here's my take on PAP vs. LiberKey...

In the end, I uninstalled LiberKey and went back to PAP. For me, the #1 knock against LiberKey is its memory consumption -- 15+ MB of memory for a menu system that is mostly sitting idle is just too much, and on principle I removed LiberKey from my system.

What I don't like about both PAP and LiberKey: when you launch any portable app within their system, a second helper process is always loaded at the same time and sits there until you close the app. I understand that this is necessary to maintain the app's portability, but it's still kind of annoying. That's why I only install a PAP app if there's no other way to make it portable. For example, does TreePad Lite really need to be part of the PAP platform? I've been using a portable version of it for years, so have no need to install it through PAP. The same applies to The Guide; a recent update added an option to make it truly portable, so I enabled this option and uninstalled the copy in PAP.

One of the main benefits of installing all portable apps through PAP used to be so that you can quickly search for an app to launch it, but ever since Windows 7 you can pretty much do the same thing using the standard Start menu (you just need to add a shortcut). The other main benefit of using a portable app suite is to keep all the portable apps updated. However, the app update mechanism in PAP isn't very robust (and there's still no auto-update), so this benefit is larger than it seems. If you are against portable app suites, then you may consider downloading all your portable apps through FileHippo.com and using their Update Checker utility (http://www.filehippo.com/updatechecker).

I first stumbled upon PortableApps, but it was quite a chore to maintain. Then I discovered LiberKey : seamless update for liberkey-provided apps, easy custom portable apps, and more. I jumped this train. PortableApps is good, but LiberKey is even better.

This is by far the best. If more people would jump on board it would take over the portable application scene. They're adding to it all the time, and actually listen to their users. PA forgot us long ago when it comes to that...

yep u're right :D
They r even fast. I try to be always up-to-date but LiberKey is sometimes even faster.

But there r also things to be done...

Reply written over 10 years ago

2019 update : until now adding apps outside libraries are hassle, you need to manually configure them to added to liberkey

Far the best portables applications laucher i've ever tested. Test-it by yourself and see. 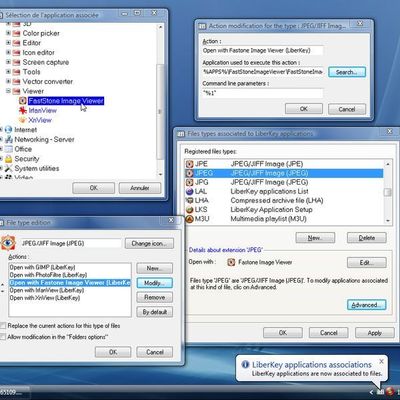 Our users have written 9 comments and reviews about LiberKey, and it has gotten 98 likes