More polished then most of the alternatives out there (Rambox, Station, Wavebox). One inexplicably missing feature and the primary reason I'm still using Wavebox is navigational shortcuts (e.g. alt+left arrow & alt+right arrow).

The perfect unified app I needed. Unfortunately not for Android.

The program itself is a bloated, laggy mess. If you're not familiar, basically it has a whole instance of chromium inside the program, just so it can render a webpage, where the buttons and chats are divs or whatever. You get a program hundreds of megabytes big, sucking up a bunch of memory, just to send some texts back and forth. Apparently this is how we develop GUI in 2019.

What's worse is the model. Initially it was free to use, but the author soon revealed that to be a classic bait and switch. A new update now requires you to make an account to use the program at all. To be clear: make an account means you give the owners of Franz all your chat account names and passwords and they record all of that data and probably sell it to God knows who. And, the author's main interest is to make people pay for that, hence naturally he forced everyone to use an account to cajole people into buying the subscription. He claims that this is because of the costs of infrastructure. Yes, I bet vacuuming up everyone's chats puts a big strain on the infrastructure! Meanwhile, the irony of demanding payment for something that is essentially a parasite sitting on top of another free chat service seems to be lost in translation.

I found it amusing to read the Github issues that followed the requirement for accounts, and the authors' disingenuous handwringing about "listening to the community". Shortly after, of course, he told the community to get lost, because he wants his money, see, and if you've been supporting the app from the beginning by using and giving feedback, but don't think it's fair to be cast by the wayside like this, then sucks to be you, buddy! Oh, he phrased it in a much more polite way, of course, as only a true slimeball could.

Don't fall for the bait and switch, don't waste your time with this crapware, and don't support evil developers who see their users as bags of money, not people. Let this awful client follow the fate of its namesake - an angry, vicious man at the helm of an oppressive, bureaucratic dictatorship that brought about one of the greatest tragedies in history.

It's just a Chromium wrapper for various chat service websites. So basically the worst solution for a multi-account messenger. If you're happy throwing oodles of memory and disk space at the problem, get Franz.

I used to love Franz, but on MacOS Big Sur - it crashes every day multiple times, and every time you wake up from sleep - No Support, it has become unsuable. - switching to Rambox

I used Franz a long time back as version 4. It was very disappointing to see version 5 requiring to sign up for an account, for whatever reason. It does not make sense and seems just to be hoarding user data. I decided to uninstall the app, as version 4 is no longer being updated.

I was enjoying it except for one thing, which made me stop using it. In the free version, when you open the window after leaving it in the background for a while, it makes you wait 10 seconds before using it, with a nag that tells you to subscribe to the paid version. This got annoying fast, since I just wanted to use it for basic messaging on a few services.

I switched over to Rambox a couple weeks ago, which does everything that Franz does but without the nag. Much better 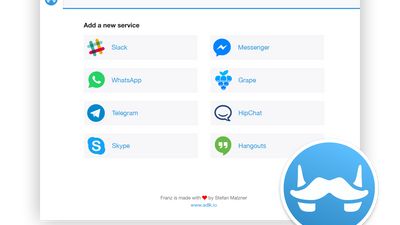 Our users have written 13 comments and reviews about Franz, and it has gotten 110 likes

View all
Franz was added to AlternativeTo by arroyorodrigo on Mar 3, 2016 and this page was last updated Apr 14, 2022.