What is Foxit Reader?

Foxit Reader is a free and light-weight multi-platform PDF document viewer. Its core function is compatible with PDF Standard 1.7.

Whether you're a consumer, business, government agency, or educational organization, you need to read, create, sign, and annotate (comment on) PDF documents and fill out PDF forms. Foxit Reader is a small, lightning fast, and feature rich PDF viewer which allows you to open, view, sign, and print any PDF file. Foxit Reader is the only high volume PDF reader providing a complete PDF creation solution, providing the power of PDF creation to every desktop. Foxit Reader comes equipped with comprehensive protection against security vulnerabilities, keeping your system and company safe.
Show full description ▾

The installer tries to install McAfee WebAdvisor and PhantomPDF Business. These can be skipped by clicking Decline on each.

Adobe is always good for examples of particulary bad software. However, the state of affairs is particularly sad when it comes to the Acrobat Reader. I don't know how they managed to make it worse, buggier, more unstable, more cumbersome to use, larger and slower with every new version, without ever fixing any of the bugs people have been reporting for often 10 years or longer.

I will base this review on one of the simplest tasks you could imagine wanting to do with a PDF file: opening and printing it.

First, Adobe Reader almost always freezes for several seconds after opening a file. This happens if a recently opened document was stored on a network path or external drive which is no longer available. The bug has been known for years and years. Nobody at Adobe ever bothered to fix or even acknowledge it. No such issues in Foxit Reader.

Finally, the document is open. Yes! We can read it now. Or try to, thanks to the infuriatingly and inexplicably slow scrolling. I'm on a bloody quad-core i7 processor and 32 gigabytes of RAM, so why is it not possible to scroll fluently through a PDF? Give the mouse scroll wheel a good spin, and it will take Adobe Reader ages to slowly step through the document. Not even disabling the various smoothing and filtering options have a real effect. They just make the document look worse, not render faster. Foxit handles the same document in a breeze.

So this PDF could be considered a somewhat larger one, containing many pictures and weighing in at a total of 15 MB. I try to print it, and Adobe seems to hang during "reducing" pages for printing (some form of rasterisation or compositing, I suppose). Only that it doesn't hang, as an experiment shows. Waiting long enough, the print dialogue finally reaches 100% after 3 hours. That's right, three hours for printing a 20-page document. This happens regardless of which printer is selected - local, network, or even just Microsoft's XPS output driver. None of this creates any issues with Foxit Reader.

But in the end, it's printed, right? Wrong. Some error dialogue pops up, and the printer tray contains only printouts of the first three pages before the job was aborted. Good job!

And the kicker? Foxit Reader's printout of the same document on the same printer is of much higher quality than the Adobe Reader printout. Somehow, for all its hour-long pre-processing of the document, Adobe Reader prints a blurry mess of figures, with chroma aberration and all. Figures are perfectly sharp in the printout from Foxit Reader. Don't ask me why, but Adobe found a way to be the worst at handling the document format they invented themselves.

I'm sorry if this sounds like more of an Acrobat diatribe than a Foxit review. But Foxit is not just good because it's not Adobe – it's a genuinely good piece of software. The free version features more functionality than Adobe's, it's well designed and has lots of customisation options, it's fast and stable. It's true that it has stopped being a true "lightweight" alternative, as it grew a lot over the years; and be aware of the bundled adware. But if you want to handle PDF documents and are somewhat attached to any hair you have left on your head, steer way, way clear of Adobe and opt for Foxit instead.

A good software with many features that you don't find from other. It's lightweight, fast and you have editing functions included and for free ! The main problem is that the installer is bundled with ads but you can be cautious when installing it or use ninite installer which automatically disable anything ads-related

I was a big fan of the Foxit Reader when it first came out. Since Adobe Acrobat was a bit of a heavier program, it would take forever to load my pdf files and Foxit loaded them much faster.

Over time, Foxit has become slower and bulkier. Initially, the Ask toolbars and the Foxit program promotions didn't bother me so much since I felt the program was still much faster than Adobe. Now, I feel as though Foxit has become more focused on its ad sales than creating benefit for its users.

My current opinion of the program (as of Oct 2011) is neutral, but if Foxit continues to bulk up and become increasing ad-laden, my opinion is surely going to be negative. It still runs faster than Adobe, but it's not the best PDF reader out there as it once advertised.

For a comparison, I like Nitro PDF Reader (and the preferable Nitro PDF Professional) more than Foxit, but I feel as though there's a better and free alternative out there.

Excellent review and I agree 100%. I also was a big fan of Foxit, but the latest version is just terrible.

Reply written about 9 years ago

Reply written about 8 years ago

Expandable, best work with its editor.

NOT FREE
Only the download is free. The application is 30-day trial, $159 after that.

This software is useless for me since it is not at least able to anonymize PDF. Factually, it does not more than Adobe Reader.
Also the bundleware warning is not true, Foxit didn't tried to install other software as the same time as itself. 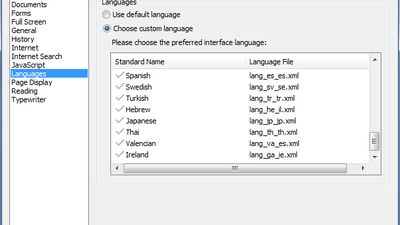 Our users have written 45 comments and reviews about Foxit Reader, and it has gotten 1314 likes