foobar2000 is an advanced freeware audio player for the Windows platform.

foobar2000 is [ wonderful / terrible ] because its [ spartan | outdated ] interface and [ versatile | obscure ] functionality are miles [ ahead | behind ] anything else available for Windows.

It's possibly best to think of foobar2000 as a sort of server rack that happens to come pre-assembled with some standard components. You can open the box, stand it up, plug it in, turn on the master switch, and play back common music files in a basic playlist. It will not impress anyone, but then again, server racks generally aren't meant to.

On the other hand, you can dig into the components that are included, assemble them as desired, and fine-tune them in ways that no other music player can lay claim to. This still won't impress anyone just looking for another iTunes or Winamp clone, but if you want to bridge all sorts of functionality that no other single system can manage, visual aesthetics aren't the priority anyhow. (Heck, if you're like me, you just might prefer the understated, resource-light look instead of all those Playskool busy-boxes out there. There's my bias, and I'll own it.)

With foobar2000 and third-party components, I've been able to:

That having been said, there are negatives:

The long and short is this: If you just want something simple and glossy that'll play your haphazard MP3 library, foobar2000 isn't what you're looking for. If you want something that can be (mostly) bent to your will and sculpted into a personalised music conversion-and-playback powerhouse, the effort in setting all that up will be rewarded in full.

I love Foobar for its HIGHLY customization that iTunes or Windows Mierdas Player did not give to me. I mean, why I want a lot of sections on a MP3 player. What I can do with Foobar it is:

-having the MP3 playing and the lyrics at the same time without clicking on properties;
-edit the IDTAG of the MP3 directly from the player as previous, and I do that a lot;
-having all the sections i want in a single window with tabs so I go faster to my destination;
-adding all kinds of metadata, live, language, mood (at night, morning mood...) whatever you use;
-organize my library by Genre, Style, even Mood or Language, if you like that kind of thing and LOVE music Foobar is for you.


The only thing is that to have a full experience you can not be a beginner on Google search or PC, etc., you must have a little experience on both. The only thing I know is that when I discovered Foobar I uninstalled iTunes and even Windows Mierdas Player from my PC saving me a lot of hard disk space and headaches because iTunes crashed a lot and Windows Mierdas Player almost every week had to search again my library.

To close this review in my opinion if you like heavy interfaces and beauty ones Foobar is not for you. > With Foobar the simple the better. 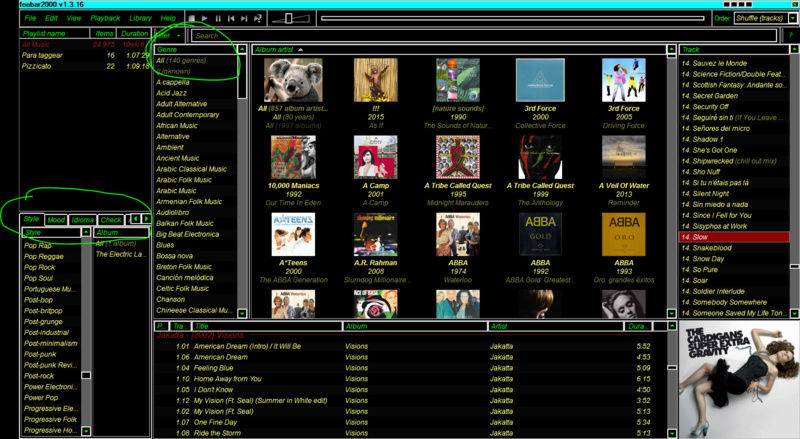 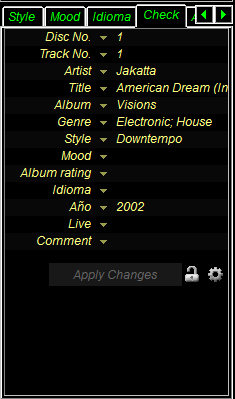 Foobar2000 is arguably the best music player on any platform.

The GUI is hideous, it can be made slightly less hideous with arduous tweaking. There used to be plugins to do literally anything, but those no longer work. It used to be possible to instantly search though all the lyrics in your library, but the developer decided that was not cool, so they removed it. To enable that requires some obscure hacks that I cannot find anymore.

The source code is closed, and the developer, being a moron, makes idiotic decisions.

Good programs like this are a cancer, they stifle innovation because nobody wants to write the whole damn thing from scratch, and they block the possibility for incremental improvement because nobody can fork or contribute to the project.

You do know you can load skins, there are hundreds of them too, from http://customize.org/foobar or http://foobarskins.com/ for example, and all the plugins I uploaded work, so I think it's your problem really.

Most of those skins depend on the Panels UI component which has not been supported for years. If you only use older versions of Foobar2000, then some things can be better.

...but really don't like the developer's and community's attitude towards user requests. Here is the perfect example of this. Not good. I used to disagree with one other review here, calling the dev a 'moron', now I see what they mean, unfortunately.

Simple and very lightweight yet still does the job and I can listen to all my music with no problems!

I downloaded a version of this that was corrupted and didn't know it. It was Very buggy to the point of being unusable. I figured the install file must have been compromised as there are so many great reviews.
I uninstalled and downloaded again, and was correct. This is a Great player, with many options and is simple to use.
If you're looking for a player that has options but doesn't overwhelm you, this is the player. I use it for playing setlists on my drums, so
I need it to work.
Great software. I hope they never stop making this one.

Our users have written 52 comments and reviews about foobar2000, and it has gotten 1411 likes