What is Black Ink?

Black Ink is a digital painting software that uses your computer's rendering hardware to provide a perfectly responsive experience no matter your picture's size.

It stands as a "generative art" software because it doesn't try to mimic watercolor or oil painting, it takes advantage of the full potential of your computer to create new possibilities such as stroke gradients and color generation from user-provided pictures.

Responsiveness is its greatest asset. Painting is always immediate and responsive, without any computer generated lag even on very high resolutions.

TL;DR
Great piece of still-updated software with a super cool layer editor and unmatched performance, but updates are way too slow and there are a few missing basic tools (wand select, bucket fill, shapes)

Why it's cool
The layer editor is node-based, so you can route layers to your liking and even re-use them (i.e. for masks) without copy-pasting anything.
The brush editor is similarly node-based. You can precisely craft every aspect of your brushes procedurally, rather than with the standard few options you have in every other art program.
The performance is insane - I run a 1080 Ti and have never experienced any kind of lag even with complex 5000px brushes on a nearly 10k by 10k pixel canvas.

Why it could be cooler
Updates are few and far between - bug fixes come out for the beta overnight after they're reported, but feature updates are exceedingly rare. After teasing a WIP wand tool over two months ago, there hasn't been a single word on how that's going, let alone its update. If I were to give one major criticism of Black Ink, it's that the devs need to communicate their progress more to patrons and non-patrons alike, in their Discord server and on Steam.

Who would like it?
Overall recommended for those with a good GPU as well as those with more technical experience (in either node-based workflows or shader code), but keep in mind the limitations. Try the demo for a good idea of what it's like (it's on Steam btw)

Disclaimer: Patreon supporter and fairly active in their Discord server

I like using it for creating initial roughs for characters and environments, mostly due to the unique brushes it offers and how fast it is. I've been looking for a true alternative to it, but there none that come close to what this software does.

Despite that though, I would only recommend this software if you liked the trial and have money to burn. The last update for it was in the fall of 2015, with the developers being relatively silent throughout 2016. The text of the UI is blurry if you have high resolution screens and it sometimes the panels bug out if you use multiple monitors. Some of the tools and extra things, like the controllers, are not user friendly. And these are things that they know, and have acknowledged, but haven't fixed.

The developers do actually post things to the forums about what they are working on currently (looks like a new brush engine for smearing) so I don't think it is dead. So I more suggest you wait and see in the coming year before you decide to actually pay for it.

Black Ink is not an ordinary painting program on many aspects: its user interface, its performance on very big documents (10Kx10K) or its unique new brushes. But today it also can be called a generative art software thanks to the new controllers system.

Controllers are a whole new way to customize your brushes. You can assign behaviors in any parameter you want and make your brush act exactly as you like using a simple visual block-based system.

Want a simple pressure sensitive opacity? A speed driven size? Or make a completely new brush ? Creating your perfect tool is as simple as plugging a behavior block in the desired output.

But controllers also are a powerful and limitless tool thanks to a collection of simple mathematical functions. Mix values, experiment with rotations, scales and gradients and you will discover countless unique effects! These infinite possibilities are what makes Black Ink’s generative art a unique creation experience.

In the next major update a brush management tool will allow you to save, organize and share your brushes with other Black Ink users. You’ll just have to download someone’s shared creation to add a completely new tool to your collection. 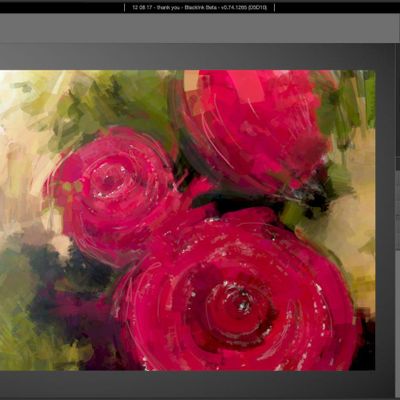 Our users have written 4 comments and reviews about Black Ink, and it has gotten 19 likes