Uploaded is a file hosting website with an affiliate program that pays uploaders from €1 to €30 per 1000 downloads (depends on downloaders' countries and size of downloaded file). You can upload files up to 2 GB in size / 5 GB to premium account

For downloaders with standard accounts, there is a wait time of 30 seconds per download, with a wait time of 180 minutes between downloads. You need to enter a CAPTCHA to begin a download. The standard download speed is approximately 50 KB/s or 70KB/s for registered users with a free plan.
Show full description ▾

There is a free option, but you have to WAIT 30 SECONDS then you get this message saying the free download is "currently" unavaliable pay us or try anything later. Look. if you want money while keeping your download avaliable, put it behind an adfly or something else less intrusive. Thanks.

This might be discontinued soon due to legal issues in Switzerland...

I used to think that Hotfile was the worst downloads website in all existence, but now I realize that this title belongs to uploaded.to. If you're a downloader, it really really doesn't get any worse than this. Hotfile's 30 minute wait time sucked, but uploaded.to's 60 minute wait time sucks even more. And as far as I know, uploaded.to's standard 50 KB/s is the crappiest downloaded speed in the whole field-- in other words, it's slower than any other major downloads website on the entire web. At least Hotfile is willing to give you up to 250 KB/s. Uploaded.to's wait time of 12 seconds is better than Hotfile's 40 second+ wait time, but at 50 KB/s, does it really matter? 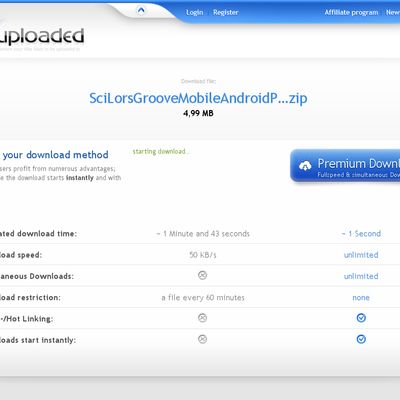 Our users have written 3 comments and reviews about Uploaded, and it has gotten 11 likes

View all
Uploaded was added to AlternativeTo by nefycee on Nov 26, 2009 and this page was last updated Nov 11, 2021. Uploaded is sometimes referred to as uploaded.net, uploaded.to.