What is Ubuntu MATE?

Ubuntu Mate is a stable, easy-to-use operating system with a configurable desktop environment. Ideal for those who want the most out of their desktops, laptops and netbooks and prefer a traditional desktop metaphor. With modest hardware requirements it is suitable for modern workstations and older hardware alike.

Objectives Ubuntu Mate has a number of guiding objectives and goals.

-Accessible to all, regardless of language and physical ability. -Increase both Ubuntu and

MATE Desktop user adoption. -Ubuntu alternative for computers that aren't powerful enough to run a composited desktop. -First choice Ubuntu platform for remote workstation solutions such as LTSP and X2Go. -Restore the halcyon days of Ubuntu before Unity was introduced. -Use themes and artwork similar to Ubuntu so that Ubuntu Mate is immediately familiar. -When possible contribute to Debian so both the Debian and

Ubuntu communities benefit. -Package selection will favour functionality and stability over lightness and whimsy. -Provide a refuge for Linux users who prefer a traditional desktop metaphor. -Get adopted as an official Ubuntu "flavour". 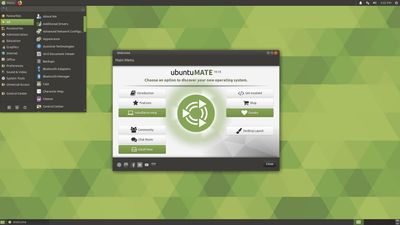 Our users have written 5 comments and reviews about Ubuntu MATE, and it has gotten 87 likes

Ubuntu MATE was added to AlternativeTo by adgellida on and this page was last updated . Ubuntu MATE is sometimes referred to as Ubuntu MATE.

Ubuntu Mate is a pretty awesome & easy to use free distribution of Linux. I have used it off & on along side with the normal Ubuntu distribution for many years now & this is my favorite of all Linux distributions that I have tried out. If you are not a major gamer who owns a lot of games that require Windows or does not offer a native installer for your games then i would 100% recommend that you give this OS a try. Keep in mind that when you load it up you will be given two options "Install" or "Try before you install" & option number two will run in live mode meaning if you are on the internet you can surf the web & use the features that are on the DISK or USB drive that you will be using to install or try it so no changes will be made to your hard drive until you choose to install Ubuntu Mate. A great feature, and you can just put this on a DVD to use as live mode on any computer even if there is no hard drive in it which is also very useful. If you need to save files while in live mode just save them to a USB drive instead so you do not loose them when you install it or restart your computer.

No Cons for this OS & if you have never tried it I highly recommend that you invest in some bland DVDs or USB pen drives so that you can have at least one copy of this OS to either use to install for yourself, others, or run in live mode. There is 0% loss here no matter what you chose to do. Even if you do not like it & chose to burn it onto a DVD blank, you will at least have a pretty awesome Ubuntu MATE coaster for your glass, cup, cans, drinks, etc.

Whenever people ask me about Ubuntu, I always try to guide them towards Ubuntu MATE, because it has that classic Gnome 2 feel that has been around with Linux forever. I have been using the MATE desktop environment on my computers (albeit, with Debian) since it was forked after the disastrous Gnome 3 release, and I can't be happier.

Ubuntu combined with MATE is an excellent choice when considering different Linux distributions. Rock-solid base with a beautiful, functional interface.

You need to switch between LTS versions in order to have lastest packages. Not good for my usage. Might be good for you...

One of the best distros I tried, lets you choose DE style, has got Head-Up Display (HUD). Super fast, easy to use, full of useful features, today is way better than Ubuntu with Gnome, IMHO.

The best OS ever !!! I like it very much. Its beautiful and customizable