Syncthing replaces proprietary sync and cloud services with something open, trustworthy and decentralized. Your data is your data alone and you deserve to choose where it is stored, if it is shared with some third party and how it's transmitted over the Internet.

Private. None of your data is ever stored anywhere else other than on your computers. There is no central server that might be compromised, legally or illegally. Encrypted. All communication is secured using TLS. The encryption used includes perfect forward secrecy to prevent any eavesdropper from ever gaining access to your data. Authenticated. Every node is identified by a strong cryptographic certificate. Only nodes you have explicitly allowed can connect to your cluster. 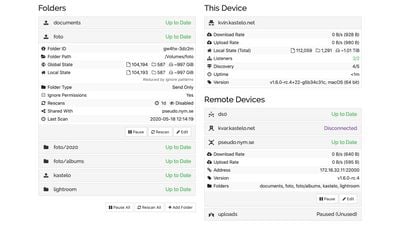 Our users have written 26 comments and reviews about Syncthing, and it has gotten 621 likes

Syncthing was added to AlternativeTo by PocketSam on and this page was last updated .

SyncTrayzor will encapsulate SyncThing within a regular program window. Can be closed and/or minimized to tray and start-up minimized as well. You can still access the web interface if desired. The SyncThing executable keeps a (ugly) taskbar slot constantly open, SyncTrayzor fixes this. Get it here, https://github.com/canton7/SyncTrayzor Also, I would like to add that it works just fine on Windows 10 x64 (TP-10130) without a hitch.

I sought out an alternative to Bitorrent Sync and SyncThing+SyncTrayzor takes care of my needs.

Thank you for mentioning this utility! My biggest issue with SyncThing was having to keep a terminal window open all the time.

If you are using Linux (terminal?) you can run it with "screen syncthing". Then just press Ctrl + AD and you have it in the background. Get screen by inserting "sudo apt-get install screen" if you are running debian-based distros like me.

If you're familiar with Resilio Sync, then you can think of Syncthing as the free and open source version of it. They share much of the same features and functionality.

I think Resilio Sync is a tad faster than Syncthing, but Syncthing's speed is still good. I'm sure it would be even faster if I could figure out how to stop relying on a relay. Speaking of relays, it's some term that the Syncthing manual uses to describe one way of how data is being transferred. That manual is quite in-depth, and is currently beyond my level of comprehension. Yes, Syncthing is quite configurable. You can get a very fine level of control over its configuration, to the point of breaking something if you mess up, whereas in Resilio Sync you would have to pay for some of the advanced features Syncthing already has.

In terms of interface, I think Syncthing's is quite nice to look at and use. With just Syncthing (not SyncTrazor for Windows), you will have to open a browser to get to its GUI. On the left, you have a list of folders that you have chosen to be shared among some of your devices. On the top right, you can view information about your current device, and on the bottom right, you get a list of all the devices that are currently connected.

Upon first setting up, it took some effort to get Syncthing working properly. I admit that I felt a little lost while getting it to work. Even after making it work the first time, it didn't always work the weeks following that. After a few months, however, I can say that Syncthing is running smoothly now.

A little note on when it syncs: this may be just my experience, but I have gotten a lot of files with "sync.conflict" appended to the end of its name. It's not exactly a big deal and can be resolved pretty easily, but it's something to be aware of.

If you are unsure of how you should use Syncthing, I'll tell you about my own use case. I have a few computers and a tablet. One computer has a good sound system. Another is my main work computer for essays and whatnot. My tablet is for note-taking during school. I set up a folder containing all my music files between the two computers. Between my work computer and my tablet, I have two shared folders, one that is extremely organized and holds all my important stuff, and another that is just a sandbox for dumping stuff to organize later. After I finish my classes for the day, I run Syncthing and all my work gets sent to my work computer, then I can view my notes on the big screen. No "cloud" needed!

By the way, you can run Syncthing and Resilio Sync together on the same folder. I was looking for a way to get my iOS powered machine in on the fun, since Syncthing isn't available for iOS.

Automatic crash reporting. See https://github.com/syncthing/syncthing/releases/tag/v1.2.0 This costs it 2 stars. The feature appeared today. Upon starting up the app on 2 of my PCs, a message appeared giving me an opportunity to opt out. On a 3rd PC, which runs around the clock, with Syncthing always on, I did not see a message to opt out. To disable automatic crash reporting, according to https://docs.syncthing.net/users/crashrep.html , one must go to "advanced configuration dialog" (not "settings," which only allows one to set anonymous usage reporting). When you click on advanced configuration dialog, a window opens with the following warning: "Be careful! Incorrect configuration may damage your folder contents and render Syncthing inoperable." When I checked, there weren't other instructions. I clicked on "options," and a number of settings appeared. One of these settings, Crash Reporting Enabled, was unchecked. I am going to presume that Crash Reporting Enabled is the same thing as automatic crash reporting. So, for my 3rd PC, apparently, I have not received an opt out notice but crash reporting has not been enabled. Maybe this will change if I restart this PC at some point (I already restarted Syncthing several times)? I don't know, but this will be one more thing that I am going to have to check for a while. Disenchanted long ago with Resilio, I have been using Syncthing. Today's change is disappointing.

any source to back up this statement ?

Has been working very well for me on multiple devices with different operating systems over different networks. FOSS, P2P, relatively easy to configure and use: Not much other than transfering speeds and UI that I could complain about.

I was a GoodSync big fan, but now Syncthing and Gs Richcopy 360 are my favorites for our work in my company, both have an easy interface, fast and simple

Can't get this to work at all