Simple tool to configure Windows Filtering Platform (WFP) which can configure network activity on your computer.

The lightweight application is less than a megabyte, and it is compatible with Windows Vista and higher operating systems. You can download either the installer or portable version. For correct working, need administrator rights.

Free and open sourced! There's a portable version as well as setup version... x32 or x64...
Customization interface, 17 languages, preset rules blocking Windows telemetry[619 Rules], blacklist/whitelist, customizable notifications for whitelist, dropped packet logging, in-client updates [no restart required], advanced rules such as boot-time filters [prevents leaking during boot(I recommend enabling)]...
Windows firewall GUI is terrible, this is much easier to understand; much easier to edit.
Previously I was using Kaspersky total security; after an account of mine was hijacked by some spyware... However during the last month of your Kaspersky license, it nags you, and is preventing windows from sleeping.
Unlike paid/freemium firewalls there's nothing to nag you, no donations [in the main interface, there's a "give thanks" in the about window] or ads in the client etc. Even though it's open source they are constantly releasing builds, so no need to self compile, unless you don't trust anyone... Has an update feature, updates ask for approval, updates don't require a restart of the client.
Hardware utilization
Simplewall [x64] 2.4.6
Size: 1.10 MB (1,154,916 bytes)
Size on Disk: 1.12 MB (1,176,120 bytes) [it's odd that windows is reporting size on disk to be larger than the size, normally size on disk is smaller]
RAM usage 7.2 - 11mb depending on how many apps are listed/filters...
CPU usage 0% - 0.5% [6700k] ; CPU usage when a notification is up/ when you change the interface styling

As the name suggests it's really simple and easy to use firewall, yet very effective. Receive a prompt each time a program attempts to reach out from your computer for the first time and decide if you'll allow it or block it, then forget about it! Rules can be modified at anytime really easily too. Comes with an already built-in set of rules to block known trackers from Windows.

I really wanted to like this program—I really did—it’s a generous offering; but I found the interface confusing and inconsistent (which can potentially prove devastating), the manual virtually nonexistent, and the user rules section altogether non-functional (again, really bad for a firewall when you have to find out the hard way, as I did).

For the simplest case of blocking apps’ network/internet access, it at least seems to accomplish that task well and conveniently. The M$ telemetry blocking is also very nice.

Overall I cannot recommend it as a serious firewall solution.

It's straightforward and functional.

Finally using this app, after using glasswire for years
really good app, simple like it's name and also very lightweight
opensource it's also a plus

Best firewall. Open source, lightweight and easy to use. 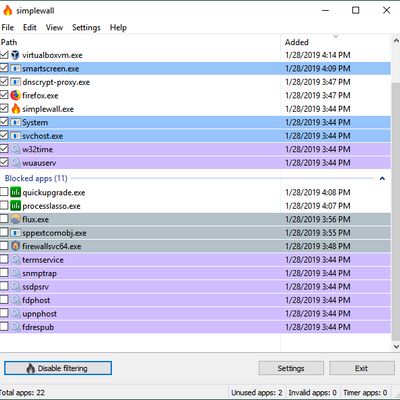 Our users have written 17 comments and reviews about simplewall, and it has gotten 101 likes

View all
simplewall was added to AlternativeTo by andreadurante60 on May 16, 2017 and this page was last updated Jan 24, 2022. simplewall is sometimes referred to as simplewall Firewall.