To protect your data Saferoom uses the AES-256 encryption algorithm with a key length of 256-bit. Currently, it is the most secure algorithm in the world which is used for military-grade confidential documents.

Our target is to create software that is seamlessly integrated into existing platforms and adds a 'piggy-back' encryption functionality. We want our users to keep their own flow of things, to keep their processes and to receive an option to encrypt data they want. Hence, our aim is to build Saferoom in a simple form.
Show full description ▾

Saferoom is an app that encrypts your Evernote or OneNote content. This is an excellent idea, because by default user data rests on Evernote and OneNote servers in a way that's easily readable. This means that hackers who gain access to your data on these services (and others), rogue employees, or intelligence agencies/feds, can all access your data and analyze or exploit it.

Adding encryption solves this problem: the data is encrypted on your device with a password only you have (again, not the way Evernote, OneNote operate). This encrypted data is sent to the service's servers, where it's unreadable to everyone. So even if hackers gained entry, the NSA forced Evernote/OneNote to give your data up (happens), or a rogue employee decided to exploit it (it's a constant problem), it wouldn't matter: your data would look like nonsense to anyone but the password holder (you). But you can sync it (download it to another device), decrypt it and use it. This model is called end-to-end encryption or, sometimes, a "zero-knowledge" model. The Snowden revelations, Evernote security breaches (see example above) and Evernote's recently aborted privacy policy revision has led for customers to demand this kind of encryption model (follow the same link). Evernote and OneNote are unlikely ever to provide it, largely for commercial reasons. That's why Saferoom exists.

For this reason, I recommend you read my more in-depth comments about the problem with Evernote's privacy and security (comments which apply equally to Google Keep, Dropbox and OneNote, amongst others) and select an alternative. In the case of Evernote, the best alternatives I've found so far are Laverna, Turtl and TagSpaces - but each have different features so you'll have to figure out what you need.

Said about Saferoom as an alternative

JohnFastman If you have to violate your privacy by using Evernote, at least know you can use Saferoom to encrypt notes in Evernote so that Evernote employees, hackers and feds can't read their content. Or change to Turtl. Or Tagspaces.
Positive comment • over 5 years ago • as an alternative to
Evernote 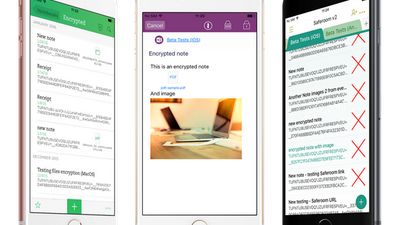 Our users have written 1 comments and reviews about Saferoom, and it has gotten 3 likes

View all
Saferoom was added to AlternativeTo by JohnFastman on Jan 7, 2017 and this page was last updated Sep 10, 2019.