Ridom TraceEdit is a cross-platform graphical DNA trace viewer and editor. TraceEdit displays the chromatogram files from Applied Biosystems automated sequencers and files in the Staden SCF format. Incorrect base calls can be edited and saved. TraceEdit is freely available and designed to operate on Windows and UNIX platforms. DNA sequencing has been the standard against which other types of DNA testing is compared. Major advances in DNA sequencing include the development of automated sequencers, discovery of fluorescent terminator chemistry, and cycle sequencing. These developments have made sequencing easier to perform and therefore more widely used. Currently, sequencing is used to identify microbial drug resistance mutations, cancer predisposition, somatic mutations, and genetic diseases. With the sequencing of the human genome and new era of molecular , one can only expect the use of DNA sequencing to increase. Therefore, an increasing number of people need to check the evidence for individual DNA sequences by inspecting the chromatograms (more commonly known as trace files) from which the base calls were deduced. Trace files are stored in proprietary formats, such as those of ABI, or public formats such as SCF. 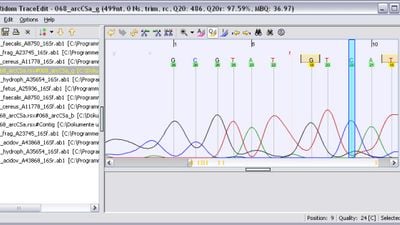 Our users have written 0 comments and reviews about Ridom TraceEdi, and it has gotten 1 likes

View all
Ridom TraceEdi was added to AlternativeTo by StephanF on and this page was last updated .