Remarkable is a free, fully featured markdown editor for Linux.

but the rendering and the formatting support is one of the best, and checkbox support is cool

But what gives, if the live preview is broken and editor is unacceptable for medium and larger texts.

Edit: I think I figured out the reason for sluggishness. Its live preview mode, because it seem to poll and re-render the contents too early. That is it should instead delay the rendering, if it detects that keys are still being pressed. This may also be the reason for live preview to loose its focus and scroll all way up.
Eitherway, in this condition, the live editing of larger documents is nigh-impossible.

Installation of .deb-package fails on Xubuntu 19.10, but installation via snap is successfull (snap install remarkable). 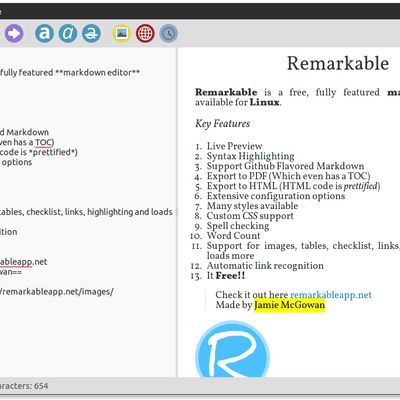 Our users have written 2 comments and reviews about Remarkable, and it has gotten 14 likes

View all
Remarkable was added to AlternativeTo by jamiemcgowan on Aug 20, 2014 and this page was last updated Apr 7, 2021.