Qobuz offers a unique online musical experience. We are different in a lot of ways: from our values to the functionalities of our applications. Let’s cite a few:

• Sound quality:
Our passion for music demands that we offer it to our users in a beautiful sound quality: lossless as well as high resolution. Several formats are available for downloads (FLAC, ALAC, AIFF, WMA, WAV). All of our applications are compatible with the highest sound quality. Be free to explore our catalogue of over 40 million titles, with more than 70,000 Hi-Res 24-bit albums. It is a passion for music and for artists that has made us lovers of good sound. Listen to music as it was written, played and recorded.

• Documentation quality:
At Qobuz, we respect the works and their history. That is why albums are commentated on and enriched, as we supply documentation on their history. We also offer you the opportunity to browse through the millions of digital booklets in all our applications. Our discographers are passionate. Independent thinking, openness, curiosity - the Qobuz style is human, and respects your freedom of choice.

• Editorial quality:
Qobuz is all about human and expert recommendations. Our editorial content looks at artists, meetings and trends in a scholarly and well-argued way. These range from small to big stories about music, for you to rediscover the pleasure of reading. Interviews, videos, photos, articles, commentaries... the editorial content that we create every day is completely exclusive. Exclusive articles, digital notes in all applications, and more. Never stop learning about the artists and the genres you love.
Show full description ▾

Qobuz is a music streaming service and download store focussed on audio quality. It's still relatively unknown, which has a lot to do with the fact that it hasn't been very widely available. So far, the service was only available in France, Benelux, Great Britain, and the German-speaking countries. However, with the January 2018 news that the service is going to be available in the United States before the end of the year, this felt like a good moment to add a first review here. Is Qobuz worth looking at as an alternative to Spotify, Apple Music, Google Play Music, Deezer, and Tidal?

After having cancelled my Spotify subscription in indignation at the way they treat their customers late last year, Qobuz was the first alternative service I decided to try and replace it with. To be honest, I went with it as a first choice just because it was the smallest service in terms of customer base. It was bound to be a bit different, more rough around the edges maybe, and not have the biggest catalogue. I thought that if it turned out I couldn't deal with its shortcomings, it would be easy to dismiss it first from my list of potential Spotify replacements. That hasn't happened, though. I let my free trial (14 days) turn into a Premium subscription and currently don't feel the need to start a trial on any of the other services.

The catalogue is very decent, with around 40 million tracks by their own count. That's more than Spotify claim to have. All the major labels are there and have their catalogues available. If you're looking for a good back catalogue, you should be satisfied. The larger number of tracks seems to be, from the way it looks to me, mainly down to a massively bigger catalogue than Spotify in the genres of Jazz and Classical music. If that is your thing, I don't see how Qobuz could possibly disappoint you.

What I did notice, however, is that for quite a lot of small independent labels, and especially artists who self-release their tracks, they're very often going to be missing on Qobuz at the same time that they're (already) available on Spotify. I don't know the exact reason: maybe Spotify is so big that it makes sense for tiny labels, and individual artists, to make deals with them specifically, and not other services. Or maybe it's just one or two big aggregators or distributors of independent music that so far hasn't signed with Qobuz. The fact remains that very often when I hear a song I like in one of my sources of very new music, I will find it already available on Spotify maybe 60-80% of the time, while on Qobuz it's closer to 20-40%. This is the kind of music for which Spotify's copyright notice will state not a label name, but the name of the artist, and the kind of music that is usually available to be streamed for free from the artist's own uploads at Bandcamp or Soundcloud. But I liked the fact that I could usually find those on Spotify, and add them to my curated mixtape playlists. I hope Qobuz will be able to catch up in that regard.

But catalogues change, and Spotify specifically had a lot of problems recently with losing licenses to much of the music I liked, from both major and minor artists. Sometimes, I would compile a 40-track mixtape over a week, and another week later, 1 out of 10 tracks would be unavailable. This can go both ways. Maybe Spotify will get worse, maybe it will get better, and hopefully Qobuz will grow their catalogue in these areas in the future.

Apart from Tidal, Qobuz is the only service I know that offers, and focusses on, lossless and high-resolution streaming. It has an effect on price: Qobuz's lowest quality offer is the same as Spotify's highest quality offer, and they are identical in cost. If you want to stream lossless (FLAC, thank goodness for that), it's going to cost you double for the Supreme subscription. Streaming high-resolution audio (up to 24-bit 192kHz, availability from the label depending) is offered with the Sublime subscription, and will set you back even a bit more (about two-and-a-half times what the Spotify-equivalent base offer costs). Depending on how and where you listen to your music, that might or might not make sense.

All the lossless and high-resolution music that's streamable, and quite a bit more than that, is also available as a classic, traditional, download-to-keep product in Qobuz's own store. It's pricey in my view, but not really more expensive than other download stores that offer the same thing.

What's plenty obvious is that Qobuz truly understands and cares about audio quality. They have their own editorial magazine section on the website and in the app, where they have, among other things, a hardware reviews section that tests speakers, DACs, portable headphone amplifiers, etc., all with regards to hi-res audio and how well they work with Qobuz.

They also demonstrate that they care about music in general. It must be the streaming app with the most detailed credits and descriptions, and for many albums you can even look at and download the PDF booklet. That is super nice.

Compared to Spotify, the Qobuz mobile client (I tested the Android version) is awesome. It's almost unreal how much smoother, prettier, and feature-rich the app is when compared to Spotify, who had many more years and dollars to work on it. You don't have to deal with Spotify's arbitrary limits, you can actually rearrange tracks on playlists, download the booklets… it will still take you some time to adapt if you're coming from Spotify, since some things work slightly differently, but I have nothing to complain about for the app so far. Which is great, considering I have a huge list of things that bugged me about the Spotify client that were never addressed.

Here, I noticed a bit the advantages that the Spotify client had. It had its fair share of issues, oh boy did it ever! But the workflow of searching, browsing, queueing, editing playlists etc. was very smooth and quick. In Qobuz, on the other hand, many of those tasks can be a lot slower and more cumbersome to perform, and it's not just down to getting used to a different interface and paradigms. Going back and forth in the client is unneccessarily difficult sometimes. And the way albums are displayed is far from perfect. No album/single distinction, a weird sorting algorithm and no options to reorder, a lot of confusion with same-named artists, and no advanced search such as you have available in Spotify (e.g. adding "year:" and "length:" search terms) makes it a lot harder to find stuff right now. I often used to race around in the Spotify catalogue and click together a very easily editable queue. The Qobuz desktop client, on the other hand, is clearly optimised for the more traditional way of listening to music, one album at a time.

I also have a few issues with it right now, such as going back a page not remembering the scroll position of where I was before (although I've read on the forums that others don't have that problem). And, tragically for a quality-focussed service like Qobuz, I'm having some audio quality issues (distortion in loud parts of dynamic tracks). It only happens on my Windows 7 system when using any audio output except WASAPI exclusive mode (the client also offers regular WASAPI, ASIO and DirectSound output on Windows), and from the lack of other people reporting it it's obviously a freak constellation. So I wouldn't put too much emphasis on these problems I'm personally having. It's just that the Qobuz development team is considerably smaller than Spotify's, and you notice it in some parts.

And here's why I'm still not too worried about that. While Spotify are world champions in ignoring customers, and actively working against them (see my review), you always feel that people at Qobuz care. Service is not the fastest, because, again, they're a comparatively small operation. But you do get to talk to real people, and those people let you feel that they care about solving your problem. You don't get nonsensical stock replies that have nothing to do with your inquiry, like you do at Spotify. What you get is an obviously personally written reply that will either solve your problem or offer to work together to find a solution. They accept, consider, and actually implement feature requests, again unlike Spotify, whose Ideas forums seem to exist just to taunt users.

Qobuz staff want you to like and use and enjoy and recommend their service. That makes me confident that whatever little hitches I still might notice in the service, are not just flying below their radar, but are taken seriously and will be addressed (as some of them already were). So, do I recommend Qobuz as an alternative to the other streaming services out there? Absolutely. I don't think anyone should financially support a company that treats their customers the way Spotify does. And I don't exactly want to give (more) of my money to Google or Apple, either. Leaves Deezer and Tidal. The former I know very little about right now. The latter is the only other option if you care about high-resolution audio. I don't like them too much though, for reasons of their interfaces, flows and presentation. Qobuz remains my service of choice for now, and I'm not looking to leave anytime soon. I finally found a streaming service that, while it has its problems, feels like it's made by and for music fans like me.

Said about Qobuz as an alternative

JokkoText
You can stream and download music at the same price as Spotify...
Positive comment • about 3 years ago • as an alternative to 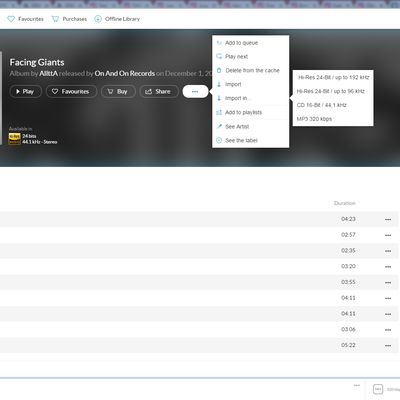 Our users have written 1 comments and reviews about Qobuz, and it has gotten 10 likes