PowerISO is a powerful CD/DVD image file processing tool, which allows you to open, extract, create, edit, compress, encrypt, split and convert ISO files, and mount these files with internal virtual drive. It can process almost all CD-ROM image files including ISO and BIN.

The installer contains ads. Be careful during the installation: Forum

For commercial tool, its feature still lacking compared to other free alternative such as WinCDEmu

Agreed. 10 years ago it was quite useful, but many other apps have been developed since, and this one seems to have lagged way behind some freeware alternatives. If you're going to charge for it, it should do more than the free alternatives, or at least be more robust. It's neither. Daemon Tools (Freemium, I think) on the other hand has been keeping pace with the alternatives. If someone demanded a paid app for this purpose, that's where I'd point them.

I have SERIOUS beef with this program. One of the few programs I have encountered that is straight up bad.

First, it does NOT emulate a CD drive. I honestly don't know WHAT it's doing. It only makes a drive letter show up - no emulated hardware behind it. This is THE ONLY iso mounter tool that I know of that does not emulate a CD reader (hardware), other than Unix pseudo-devices, which are ok because they're a different case. It makes iTunes think a blank CD was inserted, which shows that it's doing something screwy.

Trust me, I'm usually not a troll, but this is the one program I hate (along with KernSafe Total Mounter).

Also, when you tell it to mount a floppy disc image, the mount looks like a CD, and it claims to be able to edit CD images, which I'm pretty sure isn't possible. It probably saves the changes you want to make to an image, extracts parts of the image file, edits those parts, builds a new image, then replaces your old one. NEVER REPLACE THE ORIGINAL!

Why not use VirtualClone Drive or WinCDEmu for mounting?!? And maybe ImgBurn for other needs? If you want an altered version of a CD, just extract the components, and rebuild it, like with ImgBurn or something, without a 300 MB limit and for free. Why does it not emulate hardware like CDemu, VirtualCloneDrive, MagicDisc, PhantomCD, Daemon Tools, Gismo Manager, WinCDEmu, or anyone else?

I prefer Linux, and just use CDemu when actual emulation is required.

I'm going to have to disagree with some of this. You absolutely can edit a .iso file (never tried it on Linux), it is just a really fancy .zip file that also contains boot sector info. I haven't used it in a few years, so I can't speak to your other gripes, but this used to be a really good app back in the day (sometimes these "really good back in the day" apps change hands, and development falls off, but I can't say with any certainty that's what is happening here.

@hide (and everyone else): Still doesn't emulate hardware!

Figured I should finely stop by for a visit to point out that I haven't been told; it's been so long since I've flamed this program, lol.

Yeah, the speed/lightweightness is cool Hide; thanks for the statistics. But it's just too unsettling for me knowing that it's not actually emulating hardware, yet responds to some hardware checks (probably just enough to trick game CD/DVD checks). More unsettling is that it does something pretty darn wonky. Never seen anything else like it. Not emulating hardware, yet responding to certain calls? Making a drive show up without emulating hardware or even clean manipulation of the virtual filesystem (like the subst command, or something a little more sophisticated, perhaps like the unix-like family of OSs' "mount" command)? Making iTunes think a blank disc was inserted? What is going on here!

By "not emulating hardware" I mean that it doesn't make hardware show up in the list of hardware reported by Windows. Pull up Device Manager and try to find the virtual optical drive emulated by PowerIso. It's not there because it doesn't exist! Or open WMIC and look in there. Won't find it. Open any software that lists the optical drives of your system: ImgBurn, Nero, VLC, iTunes, any of them. They won't list it, because it's not there. Now try that with Virtual CloneDrive, Gizmo, Daemon Tools, WinCDEmu, KernSafe Total Mounter, or any Windows optical drive emulator, and it will show up on all of those.

Well, even with the free alternatives I can´t find myself letting go of this commercial software. It simply has all that I need to mount, convert, edit and burn all kinds of image/ISO files. I've tried similar applications but no other seems to do exactly everything this one does. Been using it for years now, and I think it will be that way for years to come. For me it's the best software of this kind. Recommended!

Daemon Tools does everything it does. Man, I just looked at the dates on these comments, this was a contentious app in 2011! 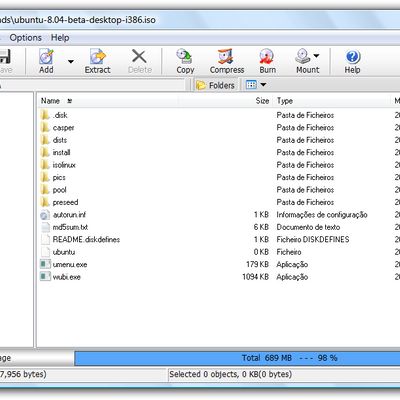 Our users have written 4 comments and reviews about PowerISO, and it has gotten 156 likes