What is PGE Project?

So what exactly is this? This is a free and open-source game engine and toolkit, that allows the creation of games of the platform genre.

The main and the most important idea of the project - to provide any user with a possibility to create platform games from existing media, that they already have or which they can draw by themselves.

The first work on the project began in December 2013, and the project was founded in March of 2014.
Show full description ▾

PGE Project is a project to enhance the level editing possibilities in Super Mario Bros. X. If you've ever heard of Terraria, then you are familiar with the same person who created Super Mario Bros. X. A long, long time ago, in the wee dark days of 2011, the creator allegedly got a call from Nintendo to take down SMBX. He did, but 8 years later, it still lives on through the contributions of a few dedicated fans. PGE Project is the culmination of their efforts.

SMBX was, in its own right, a wonderful fan game. PGE Project seeks to make it even better, and it has done so. The project isn't just about making a better level editor for SMBX (I must say that SMBX's internal level editor, while serviceable, was in dire need of quality-of-life changes, like an undo button); it adds more elements to the game, like new characters, NPCs, and events. Considering that SMBX itself is closed source, I think that's impressive.

Using the editor is a little daunting at first, what with the wealth of options, but poke around and you will find many useful tools, like searching for a specific NPC placed in the current section of the level, or a tileset creator, so you can keep track of your custom graphics. Everything about this project boils down to making level design a much more bearable experience.

[Edited by TerrifiedTyphlosion, April 14]
EDIT: I should mention that although PGE is prominently used for SMBX, PGE Editor is aiming to provide a framework for various different types of platforming games and not just SMBX, hence the name Platform Game Engine.

[Edited by TerrifiedTyphlosion, September 15, 2020]
EDIT: I heard that SMBX's source was opened recently, although the developers of PGE have said it won't really help them at this point.

developers of PGE have said it won't really help them at this point.
It's false: that SMBX2 developer told about their project. The fact source code for SMBX was open, gave the major potential to PGE Project future, here are the details: https://wohlsoft.ru/editorhelp/manual_editor.html#/Intro/About#smbx-source-code-was-published-founding-thextech

Ah, thank you for the clarification.

The PGE project is a drag-and-drop game engine/editor that lets anyone making super mario-like platform games.
Being mostly written in c++, it runs very smoothly even on old machines which emphasizes the idea that it's for everyone.
Keep in mind that even though it's heavily inspired from smbx 1.3, it is not limited to what smbx was. PGE Project gives power to the user, like custom collision boxes, and it keeps getting better. 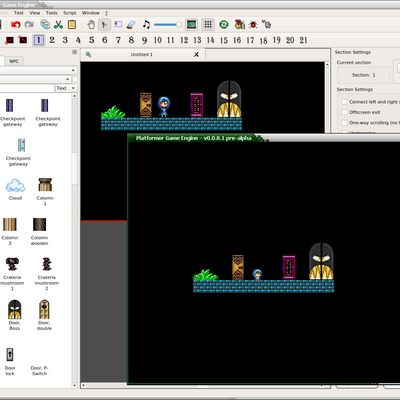 Our users have written 2 comments and reviews about PGE Project, and it has gotten 9 likes