PeaZip is released under Open Source LGPLv3 license, free for any use (private and professional), all PeaZip packages are secure downloads and do not contain advertising or harmful software. Moreover portable packages does not need installation: simply extract and use the application. 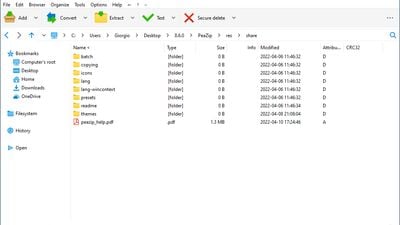 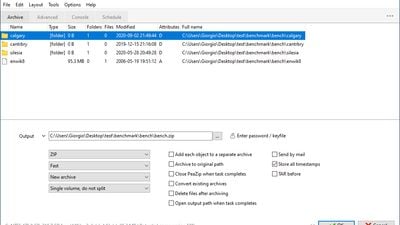 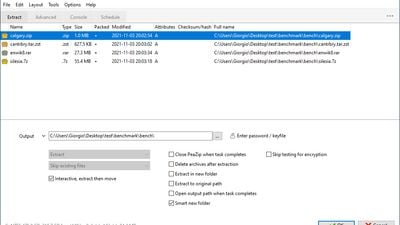 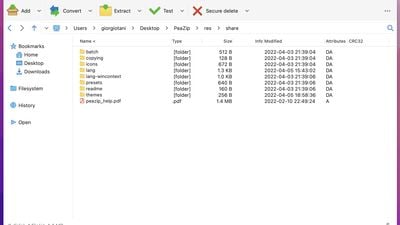 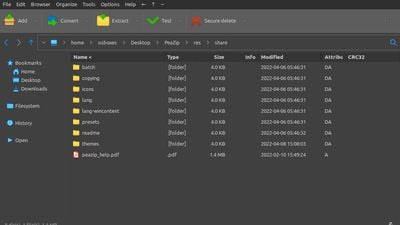 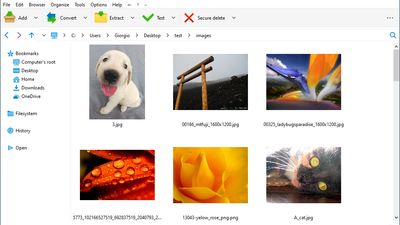 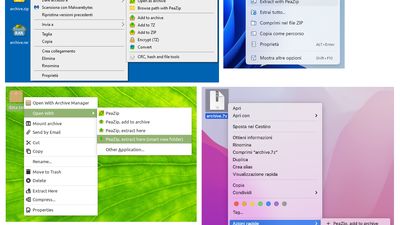 Our users have written 35 comments and reviews about PeaZip, and it has gotten 541 likes

PeaZip was added to AlternativeTo by PaneTrez on and this page was last updated .

Finally Peazip became all I dreamed of. I want first to throw this here, since people care more for speed rather than anything else. When it comes to 7z and zip archives, 7Zip is faster than Peazip.. much faster! With that out of the way.. So for anyone looking for speed, stick to 7Zip. For anyone that wants a Swiss army knife, read on.

I came here from a review on IZArc, which was the only Multi-type archiver I knew afar from this one. After leaving an as negative as possible review for that one, I want to comment on my current favorite, Peazip.

Peazip has been for the last 4-5 years, if not more, an archive program I used on the side to do what the major programs I had could not. Now it can do these and even more.

Winrar was my main extraction tool, mostly because I could open an archive that included a program in it for example, that had more than just one file and Winrar would run it as if I had it extracted in a folder. It made installation of program with multiple files easy and clean, since I did not have to extract the archive first. Peazip now supports running anything straight from the archive without first unzipping it!

FreeArc and 7zip were and kind of are my main compression tools. FreeArc, which has been discontinued on 2012 with 0.67 alpha version and the current stable release is 0.666 from 2010, is in my humble opinion the compression too, using an ARC compression method. Obviously it can't be the main archive program, because even if it uses the 7zip technology to open archives, it is from 2010 (or 2012 if you feel like using an unstable alpha version). Like I said I used Winrar in the past to open files, but since winrar did not support ARC files, FreeArc was used only to create and open ARC files. It had the power to create SFX files and if you selected a bunch of files/folders you could add each of them with a simple click. Sadly it did not have support to split the archive into pieces.

7Zip is currently the best freeware, since it is still update and it can open a lot of different kind of archives. 7Zip's compress is amongst the best, even if not the top and if anything it is the best software from the big names. Other compression software use the 7zip engine because it can actually open so many different types of zip files (sadly not including ARC). Like FreeARC, you can create SFX files and unlike FreeARC it can split the compressed file to separate parts. Personally I use a tool that splits what I want to backup with FreeARC to smaller folders, so I do not have a problem, but 7Zip has it integrated, so that is a plus. Sadly unlike FreeArc you can't select a bunch of files/folders and add each one to a separate folder.

Peazip can do it all! Obviously it can compress on both 7z and Arc formats and with a handful of other ones (BZ2, GZ, *PAQ, PEA, QUAD/BALZ, TAR, UPX, WIM, ZIP), for people that need more.

Here is a comparison from a test I did with some data folders. Remember, compressing media files ends up with results being almost identical, this is why I chose data files.

(Sorry if it looks a bit unaligned)

I used in all the default options for the best compression, with only difference in Winrar RAR5 changing Dictionary Size from 32MB to 64MB, so it can match the Ultra of 7zip that uses 64MB dictionary size too.

As you can see winrar is not close to the other two, even with it's new method of compression. 7zip and peazip seem to be the same, with peazip a bit better. I can assure you though mostly it is 7zip that is better than peazip, but usually for a couple MBs, even in huge files, so in other words, both are the same. FreeARC is still the best, but that is because the ULTRA of Peazip runs in the background what is considered for FreeARC "Best". That makes the compression of Peazip quite faster with a bit of larger size, but nothing though that important. There is a manual way of changing the commands Peazip runs, making it run the ULTRA command of FreeARC, but that is something that needs to be done every time manually, which I doubt people will want to. I run the command myself and you can see the result is exactly the same as FreeArc.

All in all as you can see Peazip handles itself quite well compared to the best compression tools I know and the differences are small. That means that when you have something huge (not videos or pictures) you can compress it with ARC if you want or if you want something widely used, you can go with 7Z.

It uses the newest 7zip technology to open files, so that means that it will be able to open any type of archive without a problem.. even "RAR5" files. From tests I did with compressing some things, RAR5 is not that great of a compression to even be compared with Arc and 7z, so I can't really care. RAR5 is NOT RAR. It is a new compression method from Winrar that was supposed to only be opened by Winrar and supposedly boasted great compression, which I have not seen. Thankfully 7z technology made it possible to not have to worry for even RAR5 files.

It can create SFX files with either of these formats. For whoever does not know what an SFX file is, it is a self extracting file, that you can use on any computer even if it does not has a compression tool and you will be able to extract the file.

It can convert between different archive formats! I already used this feature to convert a large amount of rar and zip archives of images I had I had to 7z. 7Z and ARC have the same performance on png pictures (on JPG all formats feel the same) so I chose 7Z since image readers support 7Z and I do not have to extract them. It took a long while, but I was not there to see. I simply threw them all in the converter window, hit the convert button and left. Remember to choose to delete archives in the choices, so you will not have to navigate through every folder and delete the old archives~

You can select a bunch of files and put every file in it's own archive file, be it a Arc or even 7z file, something that the 7zip does not have as an option.

You can create 7z split archives, so that means it can even do that and create a multipart archive if that is what you wish for. It can't do it with Arc, but that is due to Arc's nature.

You can split files with it! I do not mean compress and split, but just split. For anyone that know what is a file splitter, you probably needed it for an older computer with FAT32 system. Well Peazip offers that. For the rest that do not know what I am talking about, ignore this~

It rid itself of the malware/opencandy it had in the past! Indeed like some people mention on reviews, Peazip had first malwarish opencandy, meaning intrusive programs installing themselves in your pc without you knowing or wanting it and later on switched to normal advertisement software, that the program asks you if you want them installed, but does not does anything stealthily if you say no to it. People still complained then, but it is free software, so it can make it's money as it wants. I personally only hate these things when they happen without the user knowing it, not when the user click fast through the installation without reading what he clicks to.

Offers a 64bit version, which is something that slowly should be becoming the norm, considering most computers nowadays , even older ones, have at least 4GB ram and the windows are 64bit. Personally I have seen some laptops that have 3GB and 64bit Windows, probably to give the buyer the option to upgrade the ram, since having 32 bit would render him unable to do so.

I am not sure if I was missed anything, considering I can only review this from my experience, but I am 100% suggesting Peazip if you want an all in one compression tool for your PC. I have experienced some rare crashes (with the 64bit version which is more unstable) with it on heavy load, but it is definitely has come a long way and now that it is clean it is worth the try.

I recommend checking out br and paq archive formats that PeaZIP can handle if you want maximum compression for locally used formats.

As of getting absolute maximum compression at the expensive of speed and ease of use, check out AdvanceComp from the AdvanceMAME companion projects. Very rarely does anything beat it in my experience. However, being command line recompression only (meaning it can't create the initial archive) and a "Brute force" class utility, kind of makes it less useful in my book.

Edit: After some time of using PeaZip, I find the user interface quite laggy from time to time. I think I will go back to 7-Zip...

Modernized 7zip with many more features and nicer-looking UI. Exactly what I needed, AND it's open source, for icing on top. Absolutely lovely.

Is good! To be honest, I much prefer Microsoft to handle my standard zip files for its simplicity, but it's nice to have PeaZip there for other things. I used to always get file corrupted messages for 7zip when I ran some file check program.. I think it was Avast antivirus.. So, I wanted to try something different. Be sure to get the latest edition because I believe it was a lot more difficult to set default choices in earlier versions.

PeaZip 8.7.0 has questionable defaults and will use temporary files on root during extraction... This may cause severe problems because root should have free disk space.

Users can change this in General settings, set Working directory to Output here and press OK.

That seems no longer to be the case. I installed v8.9.0 and by default the working directory is set to "User's temp".

Some Windows installers made with

InstallShield Developer 7.0 can be problematic to extract correctly simply with one .msi or one .cab file or one .exe file with

FOSS For Everyone •  The Windows setup for everyone (with free software only) •  Must-have Apps After New Windows installation [V1.0: Basic] •  Essential Open Source Softwares