Paint.NET is a free image and photo editing software. It features an intuitive and innovative user interface with support for layers, unlimited undo, special effects, and a wide variety of useful and powerful tools. An active and growing online community provides friendly help, tutorials, and plugins.

The app is completely free through a direct download on the website, though there is a small fee involved for access to the app through Windows Store. 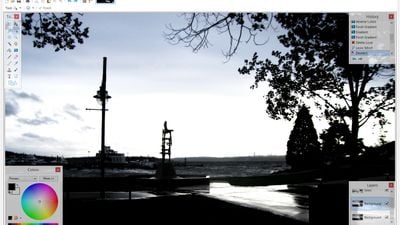 Our users have written 44 comments and reviews about Paint.NET, and it has gotten 1561 likes

Paint.NET was added to AlternativeTo by Stuck on and this page was last updated .

Works great, easy to use, lots of features, can disable antialiasing when working with really low resolution images

I like the "move selected pixels" and "move selection" feature, I find only Paint.Net has them both.

I like Paint.net, but it bothers me very much, that it is not possible to select and to move a text object and change the font size. You can only select areas with pixels, not text objects. From the moment, when a text has been created, you can edit it only as an area with pixels, not as a text with changeable size, letters and changeable text position. The manipulation of text fields is a big weak point of Paint.net.

If the developers would improve this weak point, or if someone does not use texts in pictures, Paint.net would be on of the best picture editing applications.

There is now an add-on to the latest version specifically for text editing and changing. It's also easy to move, change or resize text if you remember to put it in a different layer, and save the project as a pdn file so it can be changed later. If you compress the layers into a jpg, it is then much harder to change.

Could you specify a link to a description and download of this add-on? Can it be installed with Paint.net portable?

http://www.getpaint.net/doc/latest/TextTool.html I recommend you simply use a separate layer for text. That way you can simply delete the layer and add new text in whatever color, format, etc. you like. Save the project WITH THE LAYER in it as PDN if you feel you will edit this later. ALSO save as your preferred format (.jpg etc)but be aware you can't edit text in a flat (single layer) format like that, you will have to use the saved pdn file. This is similar to "that other" image manipulation software, just different file names for different programs that work similarly) Be aware also latest version is paint.net 4.0.6 which is likely to have quite a few new features! (No, I haven't tried it yet)

It should be possible to select some letters of a text with shift + > or shift + end and cut off the selected text. The developers should improve this big weak point. So it is uncomfortable to use paint.net .

@em4020 , you ask a feature that is from a vector drawing program. Pixel/raster drawing program are not expected to let you change the objects after they have been drawn on canvas. By using a separate layer, as said by @fixitmanarizona , it lets you do some editing of separate parta, but still on the pixel level. To get what you ask you need to move to a vector graphics editing program.

I like Paint.NET, because it's easy to use, but yet powerful.

Mandatory application, thanks for the good job!

I have been using this program from probably over 5 years now- it does not make me an expert by any means, as I am a digital editor hobbyist that edits his own works: mainly a board game that I have been developing for just as long in my spare time.

I have seen it grow and become stronger over time. It is certainly not Gimp or Photoshop, but it gets done for what I need it for. For any issue I have had due to some lack of functionality, typically I find some "work around" and wing it in some manner.

Some issues may be solved by downloading plugins for it: just as there is a dedicated programmer working on this, there are also some dedicated fans that have expanded its capabilities. In some cases, the author of Paint.net has adopted features from these plugins.

I have used it and even pushed it to its limits, which a casual user will not likely do, but with enough huge pieces (graphics for a board game) and complex layers, I have managed to slow it down.

Features I would like to see: Folders, Text Editability, tablet sensitivity.

That being said, I would Recommend it. It is allows for a free, well supported, decently (albeit basic) featured, with room for expansion, piece of software. It is the sort of program that will help you learn the basics of digital editing without the cost or the confusing heap of features (not to mention interface) that some of the other free programs have.

When you become more comfortable you can move on to those, and then, if you become more professional, you can consider buying something. But by this time it would become the logical direction of growth, rather than a nicety that you might use at some point.