What is Offen Fair Web Analytics?

Offen Fair Web Analytics is an open source web analytics software that treats operators and users as equal parties. Operators can gain valuable insights about how users interact with their services while ensuring that their users remain in full control over their data. Offen is lightweight to execute, self hosted and free. 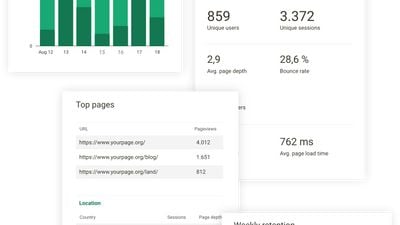 Our users have written 2 comments and reviews about Offen Fair Web Analytics, and it has gotten 4 likes

Offen Fair Web Analytics was added to AlternativeTo by offen on and this page was last updated .

The software has serious design defects: the artificial limitations that the author imposes on the webmaster make the software incompatible with the most recent GDPR released by the European Union and with the legislation of many European countries; this alone is enough to jeopardize its usability, but there is also a security problem, as the modification and recompilation of the code requires a high-end computer capable of running virtual machines and with a lot of memory, a factor that makes it very difficult to modify and revise the source code, already unnecessarily complex, not adhering to particular standards and difficult to maintain for anyone other than the author himself. Furthermore, although the software is not heavier than the alternatives, it additionally causes a slowdown in the visitor's browser and in non-optimal network conditions the consent may not appear or be recorded. In practice, integrating this software with existing websites without reducing their functionality is very difficult, because it requires the use of overlapping subpages (frames / iframes) and other technologies originally designed for different purposes, which makes it totally incompatible with WAI WCAG and other accessibility standards, factors that significantly reduce the accessibility of a site, as well as its security. These peculiarities can also obviously cause a penalization of the search engine ranking, which consequently negatively impacts the number of visitors. After the initial hype caused by the way it is presented, we find that there are considerably better alternatives, which are legal and which do not include artificial limitations on the freedom of the webmaster and system administrators, who should have total control over the code running on the their hardware. In conclusion, a disappointing experience with software that, despite being presented in a brilliant way, turns out to be the opposite at the time of use and is therefore to be avoided.

which alternatives do you recommend?

Tried it and noticed heavy slowdowns and sometimes the pages appear mangled for a few seconds when the visitor is using their mobile data plan. It has nothing special and there's no real incentive to use it.