What is MX Linux?

MX Linux is a cooperative venture between the antiX and former MEPIS communities, using the best tools and talents from each distro. It is a midweight OS designed to combine an elegant and efficient desktop with simple configuration, high stability, solid performance and medium-sized footprint.
Show full description ▾

MXLinux is my default desktop since a view month.

10 years ago i was happy Ubuntu came out, because switching from windows to Debian was a big step. All terminal stuff, very interesting though :)
After years of using Ubuntu, Linux Mint came out and i became enthusiast about LM-Cinnamon, mainly because Ubuntu switched to Unity.
With all the switches and try-outs of other Distro´s like Manjaro, CrungeBang, Puppylinux,etc I got tracked by a post about linux stuff and there i read a comment about MXLinux. Debian XFCE lets give it a try again like all the other ones i gave it a go.

To be short :
I now think MXLinux has become my default Distro for as long this will be beat´N.
Specially because of its remaster and snapshot tools. Beside that, the Distro is so solid.
It´s the hardware or my little experience with Linux what makes the flaws in the system :|

If you don´t scramble around like me, because i am curious, than you will experience a very stable system, even for a bit older machines, on the planet.

I run it also on a dual core test machine 1.6 Ghz 2 Ram and it´s slowww, so a bit more of CPU and Ram is advised.

Just give it a Go.

This is the distro that must be recommended for new Linux users!
Simply the best, least buggy, most easy on resources Debian-based Linux distribution out there!
it comes with out-of-the-box drivers support making it ideal for inexperienced users. and with XFCE Desktop environment it's highly customizable and so lightweight.

it's the ideal distro to be recommended for new users instead of Mint; as Mint actually isn't as snappy and crashes a lot (Tested with the default Cinnamon DE). while on the other hand, MX Linux didn't even flicker or twitch a bit in my experience!
Being based directly on Debian Stable (version 17 and above) gives more stability and support;
speaking of support, this little tiny distribution was among the very few ones that detected my Broadcom Wifi adapter, which was not detected by even major distros like Fedora, Debian and Solus! so here is a big bonus for that!
I think there is no need to explain about the greatness of XFCE desktop and its amazing performance regarding resources consumption, which is perfect for low-end computers :) .

It just works, and never have any problem since january 2020. And there's a feature to help you to install graphic-driver, etc. Many repos you can use. hope this prestige prevail even until all covid19-virus destroyed 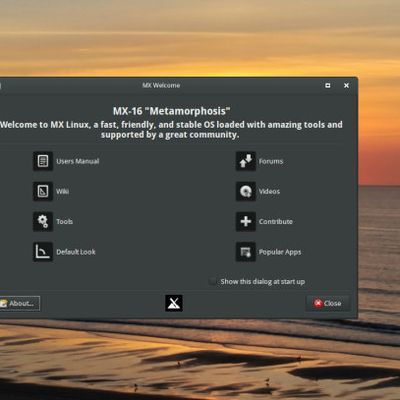 Our users have written 4 comments and reviews about MX Linux, and it has gotten 23 likes